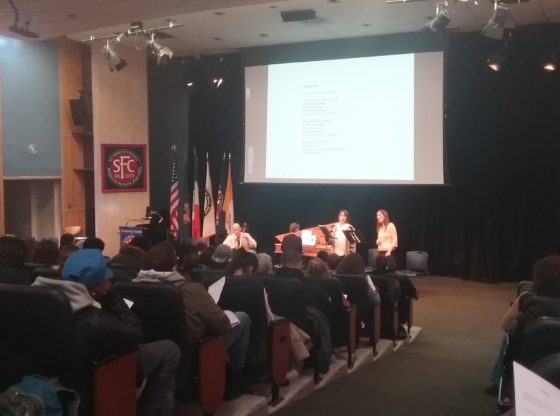 The concert featured Rebecca Pechefsky on harpsichord, David Bakamjian on Cello and Linda Lee Jones & Marguerite Krull who are both sopranos.

Rebecca Pechefsky Returns to St. Francis college again having performed at the Concerts at Half-Past Twelve series before. Pechefsky is a well known harpsichordist of the New York area. Being part of “Brooklyn Baroque” and has performed at Carnegie’s Hall’s Weill Recital Hall, Merkin Hall and Morris-Jumel Mansion. (rebeccapechefsky.com)

David Bakamjian is a recitalist, chamber player and recording artist. He has performed in a number of large orchestra as well as solo cello pieces. He has appeared in concert halls such as Carnegie Hall, Nation Public Radio and WQXR. Bakamjian also taught cello and chamber music at Lehigh University and is director of “Princeton Play Week” and “Summer String-In”.

Linda Lee Jones is a soprano, teacher and massage therapist in N.Y.C and Central New Jersey. She has performed with choral groups such as the Trinity Wall Street Church, Musica Sacra, the New York Choral Artists, St. Ignatius Loyola Church, the Mostly Mozart Festival and a number of other famous orchestras. Jones was also Director of Music for Munholland United Methodist Church in New Orleans.

Marguerite Krull is a soloist that has preformed in many of the world’s famous opera houses such as Lyric Opera of Chicago, Washington Opera and New York City Opera. She has also been seen on concert and oratorio stages including the New York Philharmonic, the National Orchestra, American Bach Soloists and many many more. (margueritekrull.com)

The Program was as follows:

Then it changes to a composition by Giovanni Picchi who lived 1571 to 1643. The piece entitled Toccata for solo harpsichord.

Another switch between artists to a composer that lived from 1659 to 1690, Domenico Gabrielli. The piece played was Sonata in G Major for Cello and Continuo: Grave, Allegro, Largo, Presto.

The preformance was one to remember if one had never heard the musical majesty of songstress’ voices in company of the instruments of their time. The power and skill needed to create such an experience is truely breath-taking.

HOWARD BEACH AND HURRICANE SANDY: AN INSIDER’S PERSPECTIVE
Fire and Ice; Death of the Titanic