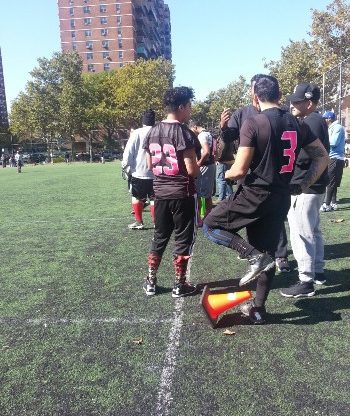 Throughout the month of October, which is Breast Cancer Awareness Month, there are many different movements that strive to increase the awareness for the disease, but a Brooklyn football team does so year-round.

Brooklyn native Jose Alvira, who started the team Save Your Soul (S.Y.S), has been leading a fight against breast cancer for quite some time, on behalf of those who are most important to him and his teammates. The team wears pink and black uniforms year-round to raise awareness for breast cancer.

“Some of our football players, and myself, have family members who’ve passed away, and are still going through it,” said Alvira, who usually goes by Bam. “We have a few of the fellas that are going through stage three transitions and all of these different stages and stuff, so that’s why we put the colors for the team.”

Breast Cancer is becoming more common, as 12% of women are said to develop a troublesome form of breast cancer during their lifetime, according to United States breast cancer statistics on breastcancer.org.

Alvira tries to raise awareness for breast cancer mainly because his sister has been battling it for such a long time.

“It means everything to me. My sister Leanna Lawton has been through three episodes of cancer, part of her breasts were removed, they removed tissue from her spine, and now they’re taking care of her cervix,” Alvira said. “Thank God she had beaten the other two.”

As it pertains to his teammates, Alvira spoke more about one in particular, his mother who had passed away last year due to breast cancer:

“She had a long fight, she was doing very well, and then the disease actually just took her life in a matter of four days,” he said. “It’s just a snatch-type of disease that is worse than anything there is out there.”

Alvira also stressed that breast cancer, as deadly as it can be, is not at all easy to diagnose and we have to be cognizant of that. He discussed that while chemo therapy treats cancer, it slows down the brain and memory.

“Just so people could be aware of this, my sister has seen three doctors from three different hospitals who couldn’t diagnose her because last December she was actually stuttering every sentence, and she lost part of her speech and memory. She would give my nephew, her son, a cup, and literally one minute later she would forget why she gave him the cup.”

Alvira said he will absolutely take part in a breast cancer walk later this month, along with his teammates from S.Y.S.

“We’re actually walking in a breast cancer awareness walk in Long Island, and we hope that with all the money that is contributed that there will be some type of cure,” he said.

THE KIDS ARE ALRIGHT: THE NEW FACES OF ACTIVISM
A SHINING TEXAS STAR