Back to back defeats for women’s volleyball

Home /News, Sports/Back to back defeats for women’s volleyball 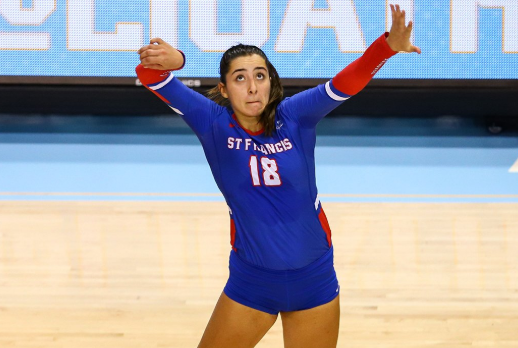 This weekend the SFC Terriers fell in the third against both Sacred Heart and the Bryant Bulldogs.

On Friday evening, they played SHU at the Pitt Center Fairfield, CT in which they were defeated in three straight sets. Una Stevic finished with eight kills, Taris Pittman with six kills and Angelee Ng with 21 assists and six digs.

They went on to face the Bulldogs on Saturday at the Chace Athletic Center Smithfield, RI in which they fell in the 3rd. In this match, Una Stevic finished with eight kills and 11 digs, Ally Speweik tallied seven kills, four block assists, and nine points, Vanja Miljacic totaled six kills and 10 digs, Angelee Ng finished with 19 assists and eight digs, Kizzy Rodriguez recorded 19 digs and Taris Pittman notched four kills and 5 blocks.

Presently, the Terriers hold seventh position in this season.


They have a chance to better their standing on Wednesday October 30, when they host the LIU Sharks at 6 p.m. at the Genovesi Center Brooklyn, NY. In their last meeting with the LIU Sharks, the Terriers were edged in four sets.

Would the Terriers add to their chain of defeat or would they upset the cycle and prevail against the Sharks?

Tune in via the NECFRONTROW website or download the NECC FRONT ROW app to keep track of the action.