AYENI BOUNCES BACK STRONGER THAN EVER

Home /Sports/AYENI BOUNCES BACK STRONGER THAN EVER 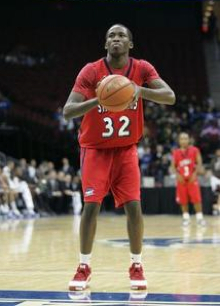 Most people don’t understand how hard it is to stay motivated after what could have been a career ending injury.

Kayode Ayeni of the mens Basketball team at St. Francis does, after tearing his anterior cruciate ligament (ACL) in the first minute of the 10th game of the season.

He could just have called it quits his senior year but his love for the game called him back to the sport which made him who he is today.

Imagine doing 15 hours of weight training and running with resistance bands and having constant trips to the training room while your team mates were losing games.

“I felt like I was letting my team mates down by being injured,” said Ayeni.

This was one of his key motivators, along with the love of family, friends and long time mentor and basketball advisor Norman Ostrin who recently passed.

The injury for Ayeni did not serve as just a curse but a blessing in disguise. “I got to watch the game from the aspect of a student rather than just playing and it made me mentally a better player,” said Ayeni.

So now comes the physical part. I recently worked out with Ayeni and he seemed to be playing better than ever.

With a chip on his shoulder to show everyone that the injury didn’t set him back, Ayeni is ready for all challengers.