AYBAR PUTS MAKE A DIFFERENCE CLUB BACK IN ACTION

Home /News/AYBAR PUTS MAKE A DIFFERENCE CLUB BACK IN ACTION 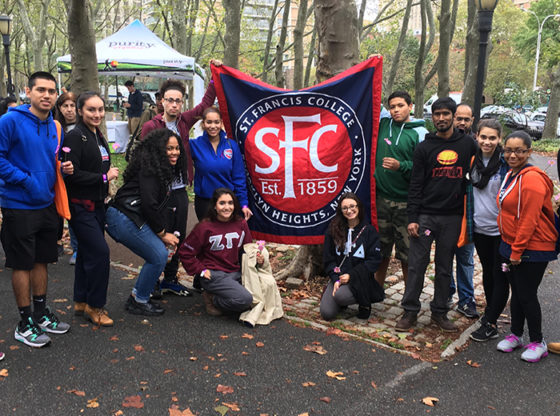 Sophomore Biology major Janelly Aybar has put her love of volunteering to good use and revived SFC’s Make a Difference Club.

Aybar has always loved volunteering and got the chance to volunteer at the summer retreat for VISIONS Services for the Blind. There, she got paired with a partially blind and deaf 8-yearold girl who she saw for multiple weekends throughout the summer. She learned sign language to communicate with the girl, and helped her through her daily activities. “It was a really great experience,” Aybar said of the retreat, “…this changed my perspective on life.”

With this new perspective, Aybar returned to her job at SFC’s student activities office, where Special Events Director Rob Oliva suggested she revive the Make a Difference club that he once advised.

Initially, Aybar was hesitant. “Since I’m a biology major, I know my time is so restricted,” she said. Familiar with the difficulties of starting a club from her time working in the Student Activities office, she knew that she would need support. “You do need a faculty moderator to back you up and help you,” Aybar explained.

She found that help in Alissa Catalano, who works in special events at SFC. Aybar knew they would work well together because, “She’s on top of everything, very organized.” They had worked well together before, and Aybar hoped to replicate that success.

So the two began the Make a Difference Club. The club consists of regular members, as well as Make a Difference Representatives (MAD Reps). To be a MAD Rep, students must commit to attending 4 meetings and 2 events. In return, they get a club t-shirt, and are registered as permanent members.

Each month, the club designates a different “awareness month” and participates in activities surrounding that cause. In October, Domestic Violenece Awareness Month, the club participated in their first awareness walk.

“Aside from walking there and meeting other people fighting it, we also got to hear speeches from survivors of domestic violence,” said SFC student Esteban Carrion, who was in attendance.

Carrion described one speaker he was particularly moved by, a woman with an abusive husband who had turned her life around to become a nun. “She kicked her drug addiction, she got away from the man who was abusing her,” he expalained, “and she’s doing great now.”

Overall, the first event was a success. “It was kind of humbling when you hear about it because you realize there are people who have it way worse.

In addition to monthly awareness-raising, the club is also looking into larger-scale projects. These projects will include collaborations with volunteer behemoths such as New York Cares and Habitat for Humanity. The group also volunteers at soup kitchens. Their next soup kitchen day will be November 27th, the weekend after Thanksgiving.

But the biggest event, aptly dubbed “The Big Event,” will take place next spring. The idea came from a school-wide day of service Catalano participated in during her college years. Aybar thought this would be fitting for SFC. “This is a Franciscan school,” she said, “we should do [a day of service].”

Aybar looks forward to making the Make a Difference club even better as the year goes on. “When I get involved in something,” she said, “I really want to give it my all.” From the look of the club’s recent success, her work ethic is seeming to make all the difference.

To get involved with make a difference club, you can contact Janelly through their Instagram page:
@sfcmakeadifference.