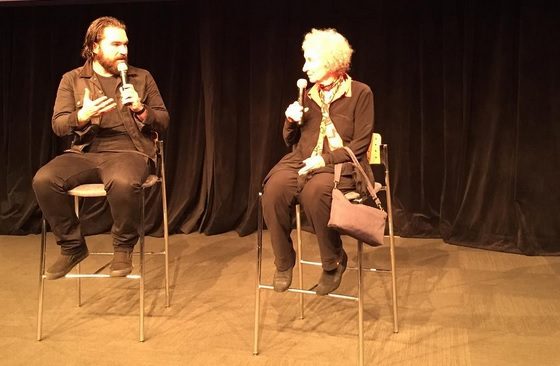 Canadian author Margaret Atwood visited St. Francis College Friday for a conversation with Buzzfeed Books Editor Isaac Fitzgerald about topics such as her new novel, “the dark side” of writing and writing without a schedule.

The Heart Goes Last – published on September 29 – tells the story of Stan and Charmaine, a couple who joins a plan to solve their economic problems, but it winds up causing them danger.

The plan requires them to live in a town that is half a prison and the other half is civilians servicing the prison. It promises full-time employment upon completion.

“There are several catches but you can see how they would go for it, very appealing,” Atwood told Fitzgerald.

While you are in prison for one month you switch with someone who then goes to live in the civilian house. You are never supposed to see the other person, but Charmaine does and some sparks fly, as Fitzgerald puts it, with her alternate.

Fitzgerald discussed the subject and feeling of space in the book and how humans take up a lot of it and deal with it while living with one another. He also talked about finding space as home and how it is also about love and meeting people we maybe shouldn’t be meeting.

Throughout the novel there are many love stories and triangles.

“Stan, not the best guy,” Fitzgerald said. Atwood then asked, “Well who is the best guy?”

“So best guys, when you put them in books they often kind of just slow things down.” Atwood said.

Fitzgerald then moved to the topic of society and which dystopian world Atwood created that she thinks she would live best in.

“As society crumbles men become worse,” he said of the dystopian world in The Heart Goes Last.

When events happen in her novels, people tend to think “would I make it through?” Atwood said. She compared this to New Yorkers on 9/11.

“9/11 had a lot to do with instability, ground under your feet moving in a different way and how do you make it through?” Atwood said.

She also related it to Hurricane Sandy. She believes people are writing these kinds of stories and believing them because similar events have happened in their lives.

Fitzgerald asked Atwood what draws her to writing these dystopian tales. She was born in 1939 during World War II and dictatorship has always been interesting to her, Atwood said. There were real dystopias in America during the 20th century, Atwood added. She knows people who went through them and got out.

Fitzgerald brought the conversation back to the smaller relationships Atwood has with her two characters in the book.

“Are there different ways in which people try to get away with things, when they’re not held accountable?” he asked.

“Oh they’ll try to get away with things of course, we’re people,” Atwood told him. “The reason human beings are so interesting is that there’s always a push pull between what we know and ought to do and those other things we would really like to do, but know we shouldn’t.”

She can’t think of just one character in particular who does a bad thing because they all do.

Fitzgerald mentioned how the book is a rewriting of a series and how the series led her to this book.

She started writing a series of installments on Biliner.com — an online site that devotes itself to filling the gap left when magazines stopped publishing longer short fiction and longer journalism.

After her first story was successful on Biliner, she did three more and her publisher started to get frustrated and would ask her: “What are you doing Margaret? These should be a book with covers and pages.”

She then began converting the stories into a novel, but had to do some rewriting and reworking as well as finish the stories.

The first question from the audience asked about “the dark side” and some advice on how to go about it when there may be some backlash or negative comments.

“Go for it,” Atwood told the audience. “The other thing about writing is, when you’re doing it, in the privacy of your own room, nobody else can see it, so you get a second chance. You get to write it and read it and decide whether that’s what you want to put out there.”

You don’t have to read or write something you don’t like, she added.

Another audience member asked what her relationship with her editor is like now and how it might have changed over the years.

Atwood works very closely with her editor, who has a company called Strong Finish, she said.

When they edit they sit down with one paper manuscript each as well as a digital version. They go through it line by line and their biggest arguments are over punctuation.

“A good editor saves you from yourself” Atwood told the crowd.

Going off of another question, Atwood said she writes her stories and then looks up facts to back it up and check to see if she remembered correctly.

Atwood explained how difficult it is to have a writing schedule when an audience member asked about her’s.

She however said that her goal for each day is to write five pages.

Atwood held a book signing for the audience members afterwards.