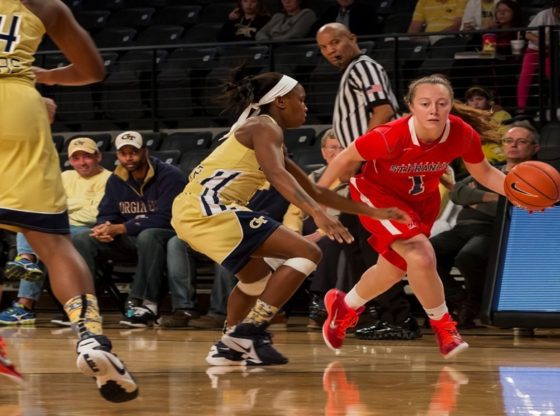 After they had a rough third quarter in which they were dominated by the leader of the Northeast Conference – the Bryant University Bulldogs – sophomore guard Blair Arthur saved the St. Francis Brooklyn Terriers women’s basketball team with two game-winning three-pointers in the last few minutes of Monday’s game, leading them to their 58-57 win.

It was an odd game for the Terriers as they defeated such a powerful team mainly due to the efforts of Arthur. The 5’6 sophomore who only averages 3.3 points, 1.4 rebounds and 14 minutes a game, scored a career-high 12 points in addition to accumulating six rebounds and two steals in 31 minutes on the court.

The visiting Terriers gave the home team a difficult time from the start, but it didn’t last forever. Bulldogs senior forward Breanna Rucker made a free throw with 5:31 left in the first quarter that tied the game 10-10.

Both teams made sure they didn’t fall behind for the remainder of the quarter. The Bulldogs were closely leading for a brief moment until Terriers sophomore forward Alex Delaney tied the game again with a good free throw.

Both teams battled for points in the few minutes leading up to the first buzzer and tied twice again. Both teams sat at 20 points when the buzzer sounded.

The teams went back and forth with scoring in the second half. They tied each other three times and neither fell behind by more than five points.

Despite good scoring and rebounding by the Terriers in the second quarter, the Bulldogs led 34-31 at halftime.

The third quarter was the first weak one for the Terriers, but it put them at a high risk of losing the game.

Rucker went crazy and dished out 11 points for the Bulldogs during the quarter as the Terriers struggled to put points on the board.

The Terriers trailed by as much as 11, but were able to improve by the end of the quarter, trailing 44-50.

The Terriers redeemed themselves by catching up in the final quarter. Their good defense led them to get closer in points to the Bulldogs and tie the game with less than five minutes left.

After they trailed 50-53, Arthur made a game-tying three-pointer followed by another three-pointer, putting the Terriers in the lead 56-53. The Bulldogs tried to make a few more field goals to surpass the visiting team, but Terriers junior forward Olivia Levey’s layup prevented that.

The Bulldogs managed to score once more before the end of the game, but fell short by one point.

In addition, both teams kept each other from scoring in the last minute.

Trailing Arthur, Delaney was another big contributor to the victory, grabbing nine points, three rebounds and two assists on 3-for-4 shooting from the field and 2-for-3 shooting from behind the arc.

Rucker was the reason the Bulldogs only lost by one point. She led her team with 26 points, ten rebounds and two assists and made 5-for-5 free throws.

Sophomore guard Ivory Bailey was another reason for their close loss with nine points, five rebounds and five assists.

The Terriers will travel to Moon Township, PA Saturday to face the Robert Morris University Colonials at 1 pm.