Another heart-wrenching loss for the Terriers 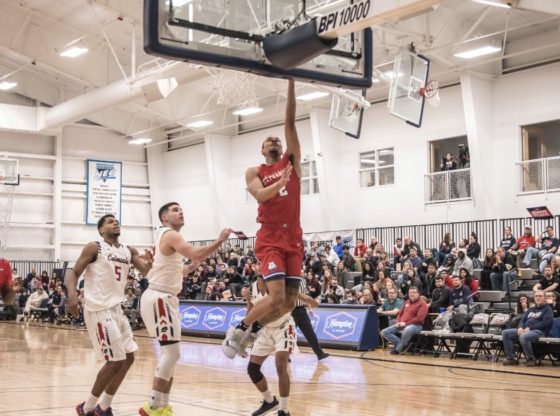 Another heart-wrenching loss for the Terriers

But despite the loss, the Terriers are now able to advance into the NEC playoff tournament thanks to losses from Central Connecticut and Mount Saint Mary’s.

Josh Williams scored 22 points and Matty McConnell would score 12 points for the Robert Morris Colonials, who gave the Terriers some trouble in the second half. The Colonials held the Terriers to only 25 points on 30 percent shooting from the field.

Only two players would score in double figures for the Terriers in Jalen Jordan scoring 18 points, and Glenn Sanabria with 10 points.

A tenacious first half in taking a 37-29 lead into the break, the Terriers would force 11 turnovers and convert them into 15 points.

With so many lead changes and game shifts, the Terriers and the Colonials would battle it out in the second half.

The Colonials would quickly jump out to an 8-0 run to cut their deficit from nine to one, making it 41- 40. Chauncey Hawkins would quickly answer for the Terriers in knocking down a three to make it 44-41 with 11:19 to go in the second.

But as time wired down, all momentum would shift over to the Colonials. With a little under 5 minutes to go, the Colonials would carry away with a five point lead after a made 3 by Williams.

However, the Terriers would refuse to let up. After Jordan’s made 3, the Terriers would cut their deficit to one to make it 57-58 with 2:53 left. but a dunk by Colonials Koby Thomas would put them up for good, as the team would shoot multiple free throws to seal the game.

Jade Johnson breaks record for most three-pointers made during a single season
Shifts in Pre-Law’s Political Arena: Filocomo Withdraws from the Race, Campaigning for Secretary of Society & SACOR Secretary Kicks Up