Home /Sports/AMDY FALL DOES IT ALL: SFC BEATS BRYANT 62-59 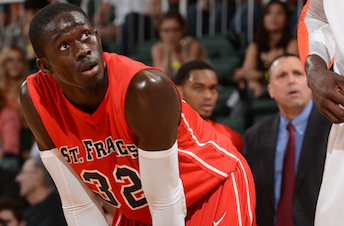 St. Francis College Brooklyn men’s basketball team came from behind led by Amdy Fall and Brent Jones to beat the Bryant Bulldogs 62-59 on Thursday night to put SFC in a stronger seeding position in the NEC playoffs. Watch the game here http://espn.go.com/watchespn/index?id=1502067

It was a real battle for the Terriers as they played catch up for most of the night. After having a poor first half the Terriers were able come back very strongly and get the big win.

In the second half it was all about better shot selections. The Terriers were 15-26 from the field in the 2nd half.

Everything was falling into place for sophomore forward Amdy Fall who had a career night. Fall made some big plays down the stretch.

With 36 seconds left in the second half junior forward Jalen Cannon found Fall underneath the basket for the two handed dunk tying the game at 59-59.

Fall got fouled in the process and hit the free throw giving the Terriers a one point lead. On the Bulldogs next play senior guard Dyami Starks tried to go for the layup but Fall blocked it.

Fall finished the game with 21 points, 10 blocks and 9 rebounds. He was one rebound away from a triple-double.

It was also another great night for the Terriers junior guard Brent Jones. He came up with a clutch free-throw with 15 seconds left giving the Terriers a two point lead.

Jones continues to be a great floor general for the team. Tonight Jones had 15 points, nine assists and zero turnovers.

Jones was not afraid to take it the basket for a layup.

Braica commented on Jones performance saying “What can you say 9 assists no turnovers 15 points made every big shot every big play got the loose ball got the deflection and the steal I mean I don’t know what else he could of did the guy was phenomenal.”

Cannon finished the night with 9 points and 10 rebounds.

With moments left the Bulldogs junior guard Joe O’Shea almost tied it up with a halfcourt shot but the ball just hit the net and misses. The Terriers were thankful that it wasn’t another heartbreaking loss.

After having a great first half the Bulldogs couldn’t get anything going in the second half. They were 7-25 from the field.

The Terriers are now 8-7 when they play team from the NEC conference. They are tied for fourth place with Mount St. Mary’s.

With one game left the Terriers will look to end the regular season on high note.

REVENGE IS SWEET THE SECOND TIME AROUND
FEVERED FORTIES: A TIME OF WAR, CHANGE, AND THE BLUES