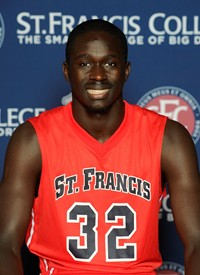 amdy2This game was all about the Terriers defense. The Highlanders shot 31% from the field.

Amdy Fall’s defense was on point. He had five rebounds and five blocks. If Amdy wasn’t blocking the ball, he was alternating the Highlanders shots.

Fall (left) said after the game: “I think we are going to be one of the best defensive team in the country when it’s all said and done … everybody got to get on the same page.”

The Terriers had three players score in double figures. Jalen Cannon had 18 points and 6 rebounds.

Thursday night’s hero Aleksander Isailovic had 13 pts and 8 rebounds by coming off the bench.

It was a good day for the Terriers — and they got Ben Mockford back. He was out the last two games due to back spasms. Mockford finished with 9pts.

Coach Glenn Braica was happy with Mockford’s performance. Braica said “I thought he handled it well he came in and let the game come to him.” Mockford wasn’t just shooting three’s — he was able to drive the ball in the line.

The Terriers next game will be on the road Monday, December 30th they will take on Delaware University.

HalfTime-
At the end of the first half the Terriers lead the N.J.I.T Highlanders 36-32.

The Terriers had a ten point lead with 3:42 remaining in the first half but the Highlanders battled back cutting the lead down to four.

If the Terriers want to win this game they need the crash the boards. The Highlanders have ten offensive rebounds, sophomore forward Terrence Smith has a team high nine points and six rebounds.

Turnovers have been another problem for the Terriers they have nine.

The first half wasn’t all bad for the Terriers. Ben Mockford made his return. He has five points.

Jalen Cannon is also having a nice game. He has ten points and three rebounds. He shooting 6-8 from the free throw line.

The Terriers have also kept Highlanders guard to Damon Lynn to only seven points.

Denfense will be a key factor in the second half. The Terriers have to box out Terrance Smith.

Preview- The Terriers will try to extend their win streak to three after beating the Lafayette Lepoards 65-62 in late game fashion.

Their opponents this afternoon wil be N.J.I.T Highlanders who come into the game with a 6-7 record and are currently on a three game losing streak.

If the Terriers win tonight they will have a two game lead over Bryant in NEC conference.

Today the Terries will see Ben Mockford return. He has been out for the last two games with back spasms. This season Mockford is averaging 8.6ppg.

The Terriers will have to watch out for Highlander’s freshman guard Damon Lynn.

He is averaging 16.8ppg and had a season high 27pts against Army. Lynn has scored at least 20pts in the last four games.