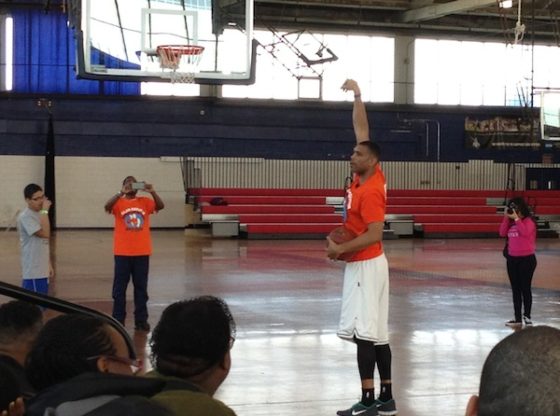 Former New York Knicks All Star and current Assistant General Manager Allan Houston teamed up with the Director of iStar Financial, Inc., Jay Sugarman, March 30, to host a charity event, which highlighted the importance of fatherhood and family bonding.

The event, held at Queens College, was the conclusion of the five-borough basketball tour. Allan Houston’s ‘Father Knows Best’ program was the host of the tour throughout the different cities.

The day included a multitude of activities for children and their fathers to participate in together in order to promote a healthy bond and to instill positive values in the kids. The activities ranged from many things, including a basketball shooting tutorial presented by Houston, shootarounds, competition amongst the kids, music performances, and even a dunk contest performed by the Harlem Wizards.

Every parent and child at the event received a free t-shirt along with free food and drinks. The kids who won certain games were given trophies while the others were awarded medals for their efforts.

Although Houston and Sugarman hosted the event for the children to have fun and mingle with peers, their true initiative was to develop a certain sense of value between the father’s and their kids. They wanted to show that no matter what the activity is (in this case, basketball), both the parents and kids could learn from their experiences and grow from them.

Throughout the day, whenever Houston or one of his fellow coaches at the event spoke on a microphone, they would mention this acronym they wanted the kids to remember. FISLL was the acronym, which stands for Faith, Integrity, Sacrifice, Leadership, and Legacy.

Houston hosted the same charity event in other cities throughout the nation but felt it was time to bring it to the urban communities of New York.

“These principles and the connection with a father or mentor and kids is important in any community. We’ve seen that, even in a corporate environment, that all these principles apply to any father. The reason it has been prevalent in these communities for us is, there is a hunger and a thirst for men in the urban community to have a connection with their kids,” said Houston.

Sugarman has hosted the iStar charity shootout for the past ten years at Madison Square Garden with multiple other supporters but felt it was time to bring his message to the other boroughs of New York.

“We really wanted to get closer to the grass roots. Who are we impacting, how are we making a difference, and no matter where you go what you find is that fatherhood is a key initiative right now,” said Sugarman.

In an attempt to really deepen positive values, the Allan Houston Legacy Foundation team has awarded 20 pairs of fathers/mentors and their children the opportunity to learn the FISLL curriculum for seven weeks.

In recent years, the amount of professional athletes, both current and former, that give back to the community and form their own charities has increased dramatically. Houston told us it’s not just athletes that should try to be a positive influence on society by hosting events such as these but rather anybody could do so.

“Anybody who has a platform or a voice, I believe, has some kind of responsibility to give back and use that to make things better. This [basketball] just happened to be my calling,” said Houston.

While Houston concluded his five-borough basketball tour, his seven-week FISLL curriculum is about to launch. For Sugarman and the iStar foundation, they are continuing to look for things that can make a difference.

“We continue to focus on education and New York City needs. We also support Human Rights First around the world. There is no shortage of work,” said Sugarman.