ALL THE WORLD’S A STAGE ON SFC-BOUND SUBWAY 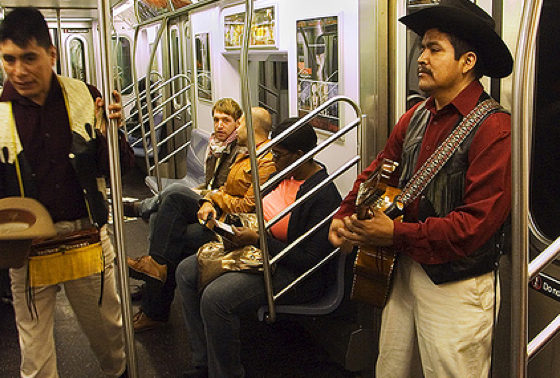 On your subway to St. Francis College, you just might hear: “This is a Brooklyn-bound 4 express train. The next stop is American Idol.”

It seems that at least once a day travelers on the subway are serenaded by passers-by looking to make some money.

While some “musicians” are impressive, some are so bad that they make contestants on the Fox hit series “American Idol” look good.

Living in Queens, I take the 7 train to Manhattan before transferring to a Brooklyn train. The 7 has its share of homeless people looking for food, or high school dropouts selling candy to “stay out of trouble.”

Sometimes people will board the train and read the Bible in a loud voice to get people to see, as they like to say, “what God has promised you before the end of the world!”

Then come musicians and singers who pass their hats around for donations. Recently I heard a man sing a good rendition of “I Don’t Want To Be” by Gavin DeGraw. I would have given him some change myself, if only he hadn’t started singing the same song all over again.

A man who had recently lost his legs boarded the 7 train and began to crawl around the car floor shaking his can looking for donations. What made this guy stand out from the others was that while he moved along the floor he shook his can to the tune of “Camp Town Races.”

Another subway line for musicians is the 2 train, especially early in the morning or late in the afternoon. Some of them sound so bad that some riders move to another car or get off at the next station and wait for the next train to come.

One woman on the 2 train boarded at 14th street and read a verse from the Bible before singing a random song she had just made up. She did this with the use of a mega phone, and suddenly everyone stopped what they were doing to listen to her. When she finished, there was loud applause.

It is amazing to see people get on a subway car and sing any song that comes to mind. Some people give them spare change, and others give them as much as a couple of dollars for their “talent.” If these performers are good at what they do, one can’t help but wonder why they don’t try out for shows like “American Idol” or “America’s Got Talent.”

TODD P BRINGS DIY PROMOTION TO BROOKLYN
TOO MUCH FACE AND NOT ENOUGH BOOK?