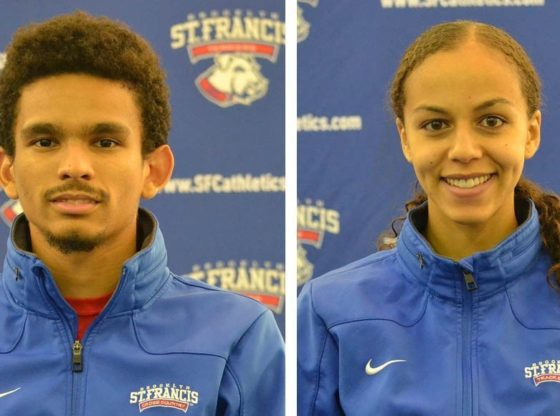 With the 2015 cross country over for the St. Francis Terriers, the men and women are now preparing for their upcoming indoor track season. Junior Luis Porto and sophomore Annais Cummiskey were the lone Terriers to leave NEC championships with some hardwood coming off of their stellar showings at the event.

Porto finished 11th place in the men’s 8k race with a team best time of 25:55.0. Porto earned a spot on the all-important All-NEC team because of his performance. Not to be outdone, Cummiskey came in fifth place in the women’s 5k with a 18:24.0 time. As a result of this, Cummiskey earned All-NEC honors, as well as the coveted NEC Freshman of the Year award.

Porto reflected on the cross country season positively, pointing out something’s that his team could use to build on.

“I think we had a good showing at this conference, we got sixth overall, we weren’t that far away from other teams,” he said. “We’re a good young team and by the time we get more years — we’re definitely going to look like a better team, and probably threaten CCSU (Central Connecticut State University) and their championships, that’s definitely a goal we want to take on.”

Cummiskey spoke glowingly of her teammates who stood by her side in her first season at St. Francis. The ladies finished ninth at NEC championships, and Cummiskey says that the team made strides throughout the year in order to claim their place.

“I’m really proud of my cross country team,” she said. “With Coach Jeremy Busch’s guidance, we were all able to improve our times from the beginning of the season.”

Cummiskey, a transfer student from McGill University in Montreal, says her teammates made her move to Brooklyn Heights a non-issue.

“I definitely couldn’t have had the season that I did without their support,” she said. “They made my transition to St. Francis much smoother than I anticipated. On my first day of classes, I already had a great group of friends…Friends I could count on for anything!”

On the opposite side of the spectrum, Porto assumed a leadership role for the first time at St. Francis. The third year runner says it was a challenging experience, but one he took head on since he had no choice. Porto was also very complimentary of his teammate’s efforts throughout the cross country grind.Porto running2

“It was the first year where I became the leader on the team because there’s nobody older than me on the team,” he said. “No seniors, I was the oldest, and everyone was looking up to you so it’s like ‘holy crap, when did this happen?” he laughed. “It was a learning experience — I think I did an okay job; everybody had good work ethic, each person wanted to get better. We wake up at six a.m., some of us at four a.m. just to make it to practice on time. Everybody was just really dedicated this season”

Earning All-Conference honors was an achievement Porto successfully aimed for, but he also won’t dwell on the honor. With indoor track looming, and outdoor track to follow, Porto says its one goal and on to the next.

“Last year I thought ‘I’m getting all-conference this year,’ then I went out too fast and blew the whole race,” he said. “This season I secured the place I was in — I knew I’d get all-conference if I stayed in this place. Once I had it (all-conference), it wasn’t so special anymore. I got it, I made it, and you just set higher goals every time,” he continued. “You get like five minutes of happiness, and you think ‘I could’ve run faster.’ You reach one goal and you’re on to the next, so now it’s like ‘alright, I’m all-conference, time to win now. The more achievements you get the more hungry you become.”

Cummiskey wasn’t hesitant to credit coach Busch with her success, and her improvements became more noticeable as the season progressed.

“There wasn’t a certain meet but I definitely began to notice my improvement in my tempo runs. I started off the season with a tempo pace of 6:35 for 25 minutes, and by the end of the season my tempo pace dropped to 6:20 for 30 minutes,” she said. “My pace reductions really gave me the confidence that not only was I improving under Coach Busch’s excellent guidance, but it also made me realize I was capable of placing among the top twenty in our conference.”

Earning accolades served as confirmation for Cummiskey, who insists that her natural talent ability lies within cross country. The Montreal transfer also felt that her elder teammates helped set the path for her to quickly adapt to a sport she just began participating in.Cummiskey with accolades

“Of course, it was a tremendous honor to be selected for NEC Freshman of the Year and to have made NEC All-Conference,” she said. “Stephanie (Morales) and Kaushi (Pathwahandi Silva), our seniors, definitely helped me learn the ropes. They were always very supportive and really motivated me to be the best I could be. Next year’s season won’t be the same without them.”

When reflecting on the season, Porto acknowledged some of the struggles that can appear throughout the rigorous cross country schedule, mainly the number of leg injuries a distance runner may face.

“It was a hard season man. Injuries here and there, we had some races where we didn’t even finish as a team,” Porto said. “Once you’re in this mindset of doing so many miles each week, your body can only take so much. Sometimes there was only two guys coming to practice, sometimes all five of us weren’t feeling good because of injuries.”

Both standout athletes will be looking to help get their respective teams to the next level as they move forward through the indoor and outdoor seasons. Porto for one simply can’t wait to compete again, starting on December 6 in Farleigh Dickinson.

“I can’t wait for indoor and outdoor. Basically what cross country does to you is it gives you a great base of how much you can endure,” he said. “This cross country I improved from last cross country so I’m going to use that base and just sharpen up and get faster for the indoor races.”

After ending her first season on a high note, Cummiskey is just as eager to hit the track this December with her teammates.

“I look forward to running whatever events coach Busch ultimately has me compete in,” she said. “I feel that our cross country team has improved leaps and bounds since September and hopefully we’ll be able to transfer our cross country success to the track.”

“I wanted to thank coach Busch for making me the runner I am today,” Porto added. “He’s been a great mentor throughout the seasons I’ve been here.”