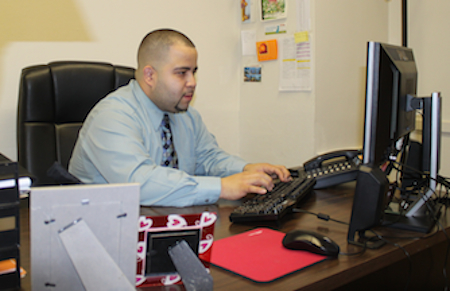 Ruben Gonzelez, SFC’s Associate Director of Student Activities at St. Francis College, has been a helpful and reliable figure for students since he assumed the role in Fall ’07.

Often bridging the gap between students and administration, as well as being the go-to guy for student organized events, Gonzalez works tirelessly to ensure that campus life at SFC is both safe and fun for the student body. “[I] always look to serve. [As well as] look to leave a positive mark…I try my best for everyone,” said Gonzalez when asked about his hard work.

Even when he was a student at SFC, Gonzalez exemplified his words. Coming into the school on the cusp of a fallout between the members of the Latin American Society, Gonzalez along with a few other freshmen helped rebuild the club under the guidance of former professor Dr. Garcia.

He describes Dr. Garcia as one of his first mentors at St. Francis and said: “He really helped me learn what leadership was about.” Working with this club allowed him to learn valuable skills such as teamwork, networking and hosting large scale events (through collaborations with other clubs).

As a result of his successful run in the Latin American Society, he was approached by former student Robert Oliva, SFC’s Director of Special Events, about possibly working with him as Speaker of S.A.C.O.R. in the SGA if he won his presidential run.

Gonzalez said: “I had already applied for SGA, but only because I needed a second club to fulfill my Dun Scotus Honor Society requirements. A little selfish, I know, but soon it became so much more than a club to me.” He later ran for and won the position, which was a great fit for him because of his club background.

“The funny thing is I didn’t picture working here until my senior year when I developed better relationships with administrators,” Gonzalez said. He mentioned Dean Howell as another mentor to him during his senior year. He had done a lot of community service work as a young man, ranging from being a youth counselor at Our Lady of Perpetual Help Church to working with a summer camp. Gonzalez said: “I always did picture myself at a school in some capacity though. I just didn’t know where.”

Many students do not know that Gonzalez did not automatically assume the position he currently has. He returned to SFC in Spring 2005 to work in the Financial Aid Office as a specialized loans counselor. It was only when the former Associate Director resigned that Gonzalez put in his application, also applying for the position of Assistant Director of Career Development a little earlier. Cheretta Robson had also applied for the position of Associate Director of Student Activities, but landed the job in the career center, resulting in Gonzalez obtaining the title that he currently has.

Gonzalez’s daily activities include facilitating intramural sporting events with his staff, working closely with student affairs and having weekly meetings with SGA executives. He is also the main administrator who helps students and clubs organize events and book rooms for meetings.

Gonzalez is the moderator for various clubs including the Dance Team, African Cultural Club, Alpha Phi Delta Fraternity Inc., The Yearbook and Colleges Against Cancer. His office sends weekly highlight emails to all SFC students about what’s going on around campus and ensures that campus events run smoothly. He is currently working on how to broaden the reach of the Office of Student Activities to influence dorm life and put on events for those students such as game nights and city tours.

Although he has a lot on his plate, Gonzalez remains a smiling hardworking administrator who is willing to answer any questions for anyone who stops by his office. “I love being in a position where I can help people and also watch students who came into my office as freshmen grow into confident, well- thought individuals,” he said. Without his help, the student body would certainly be missing one of its greatest assets.