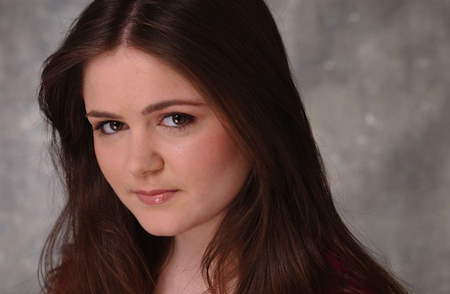 Starting October 22, 2010 the St. Francis College Troupers will be performing Angels in America.

Among the cast is Chelsea Clark, playing Harper, a pill- popping scattered-brained woman who finds out that she is married to a gay man.

Chelsea Clark came to SFC from the Conservatory for Dramatic Arts in New York and the school for Film and Television also in New York.

She is now a Communications major with a concentration in Performance Studies. Her passion for acting is what led her to choose this career path. “You have to have a passion for what you do and I want to do what I love and I love to act.”

Even though she is a student Chelsea has already been in numerous independent films and plays.

She received roles in the films, Pain, Eternity, The Price of Happiness, S&S Studio Film, A List of Everything I Can Remember, an untitled horror flick, Recovery Girl, Confessions of a Catholic Schoolgirl, Abby Newton, and Raider’s Revenge.

Chelsea has also been in the plays, Plaza Suite, The Blue Room, Election monologue, Polaroid Stories, Bastard, Tartuffe, Brilliant Traces, and XYZ Files (Off Broadway). She has also recently done voice over work for a film called Project Wrong Way.

This actress is not afraid of any role. “I like to play anything that will challenge me and stretch me as an actress.”

When asked how she prepares for a role Chelsea said, “Usually you have to get into the mindset of a character…you have to submit yourself to that character and that role.”

The only time that she has turned down roles is when she already had too much on her plate. “I’ve only turned down some student films because I was busy,” she says. “That’s pretty much the only thing that makes me turn down roles- is if I’m too busy”.

This impressive resume takes hard work to build but with the help of her ever expanding talent, NYCastings.com and her mother, Chelsea’s resume is going to get even bigger.

Once this shining Trouper graduates SFC in 2011 she hopes to support herself as an actress and with a talent like hers that should be no problem at all.

Here’s looking at you kid!