ACC BRINGS THE BEATS OF AFRICA TO SFC

Home /News/ACC BRINGS THE BEATS OF AFRICA TO SFC 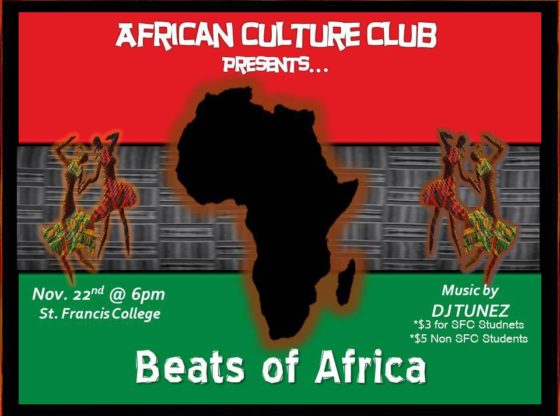 This Friday Nov. 15 the African Culture Club will present The Beats of Africa, a showcase to celebrate African culture through song, dance, and poetry at 6pm in Founder’s Hall.

Guests will be welcomed by the beats of Brooklyn-based Nigerian DJ, DJ Tunes, and a live band performance from Kill the Shadow.

Cultural performances include not only the SFC Dance Team, but teams from a variety of schools in New York City, such as St. John’s University’s FGNP (Fine Gal No Pimples) dance group, and one of CUNY- City Tech’s most well-known fraternal organizations, Phi Sigma Chi Fraternity Incorporated, and their signature drums.

“I am very excited for Friday because we’ve already given the campus so many flavors of our African culture this semester and now we get to end with another event that will expand even further on the culture of Africa,” said by Fatima Turay, President of the African Culture Club.

From their African beading event, movie nights, food sales, and charitable community service, ACC has been taking the campus by storm.