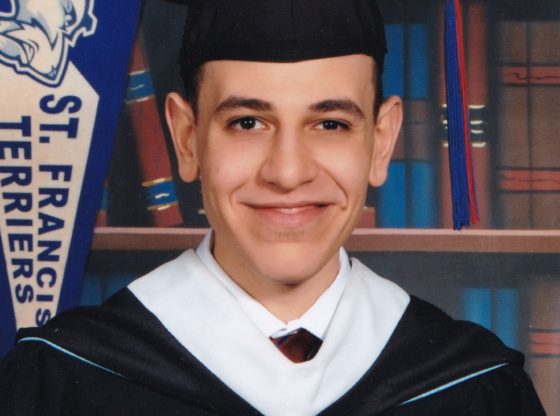 SFC Alumni Abanobe Barsoum graduated in May 2018 with a major in English and a minor in communications.

During his undergraduate career, Barsoum consistently made the Dean’s List and received the Brother Celestin McGarry Memorial Purse Award in English in April 2018.

On campus, he was a member of the English Club and occasionally contributed to SFC Today, as well as being an editor for SFC’s webzine, Charcoal.

He says he “chose to attend SFC for two reasons. The first being that it was so close to home that it meant I didn’t have to go away to college and could just commute to school while still living at home.

“The second being its close proximity to Manhattan and the rest of NYC. Location was a big deal to me. I definitely wanted to stay close to NYC to try and capitalize on the internship and job opportunities during my time as a college student and to explore everything else the city had to offer.”

Initially, Barsoum planned on “only pursuing a major in English with the hopes of breaking out into the literary and publication fields after I graduate.”

However, a few months into his junior year and after taking a few courses in the Communications department, he realized that he “wanted to do something more in that respect without having to give up my studies in English, so I decided to pursue a minor in Communications.”

Barsoum’s post commencement plans include looking for and applying to internships with media writing agencies and copywriting firms.

“I am also deciding on either attending graduate school to pursue media studies or to attend law school with a concentration on media/communications law. The many grad school and job fairs that SFC has held have definitely helped me navigate my next step in my post-grad career.”

Barsoum’s advice to SFC students is “always be engaged both in and out of the classroom. There are numerous events on and off campus that can be taken advantage of.

“I also recommend that students try to become more involved with the many campus activities—whether it be joining a few clubs or attending a lecture—because you never really know what could turn into a possible networking opportunity.”