A webinar with Jennifer Demme Harris which, motivates students during a time of uncertainty

Home /Featured/A webinar with Jennifer Demme Harris which, motivates students during a time of uncertainty 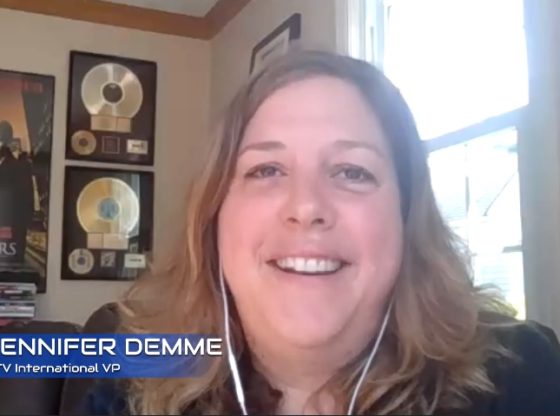 Jennifer Demme Harris, the current Vice President for Production and Development for MTV International joined Professor Gewritz on a webinar.  Unfiltered, Jennifer spoke about the highs and lows in her career and how they impacted her, leaving students feeling motivated.

“Find the story you’re passionate about and create those stories and then shoot them, even if it’s just you with your camera and nobody else is there. Start and then go from there and see what happens and be open to the possibility to try new things.

“This kind of career does not happen overnight, it takes years of hustle, blood, sweat, and tears,” said Jennifer Demme Harris.

As the first webinar to kick off Professor Gewritz’s “Influencers in Communications” webinar series Jennifer was joined by students from Basic and Advanced TV Production courses, Jennifer was able to tell the students, her story and the dedication that she put in every day to be where she is today. The webinar series is a way for students to get a chance to network with influential people.

“I’m glad I got a chance to hear Jen’s story during this strange period that we’re in. Her perseverance and raw honesty were really refreshing. I learned a lot and it gave me the push I needed,” said Senior, Mahalia DeRosiers.

Jennifer has currently been producing MTV International Yo! MTV Raps, and has been involved in both feature films and television shows such as 1992 MTV Inaugural Ball: President Clinton, MTV Spring Breaks, The Grind, MTV Video Music Awards, Rounders.

Her brother, Ted Demme was one of the original creators of MTV U.S. Yo! MTV Raps. Jonathan Demme, her uncle was a two time Academy Award winning director for his films, Philadelphia and Silence of the Lambs.

When she was in college, she didn’t know exactly what she wanted to do, “I was clueless with what I wanted to major in.” Therefore, she decided to take courses that seemed interesting to her and ended up graduating with a degree in International Studies and a minor in Spanish.

After graduating, Jennifer knew she needed to get a job soon and started looking at things she enjoyed. That year, the Olympics were being held in Barcelona and figured that that’s what she wanted to do.

Her brother’s coworker had a contact with someone from NBC and for six weeks she called the assistant of that person an average of three times a week. After the seventh week, Jennifer got an interview.

“I came in for an interview during spring break, went to 30 Rockefeller Plaza, terrified and about two minutes into the interview they had a massive fire drill in the building. What was great about it was that it broke the ice and it totally broke the tension.

“The funny part was they made me put my spanish skills to the test in the stairwell, where everyone was congregating in the stairwell and so with no led time, I just had to prompt conversation and of course I fumbled over my words.

“I’m sure I made absolutely no sense but because I was book smart somehow, someway I ended up getting the job.”

From the PA position in Spain, she hustled hard and realized that she was good at production and that’s what she wanted to do.

Struggling for a month of trying to look for entry level jobs in sports production after Spain, she found and was hired for an assistant position for someone from MTV. At the time, her brother Ted Demme had been working at MTV and she was hesitant to take the job.

“I didn’t want to be accused of nepotism and oh you got the job because of your brother. Lucky for me Ted was on his way out of MTV, so my entrance came right as he was exiting. I still thought that I was going to have to prove that I was a hard worker a little bit harder than the average person and yet it was the greatest decision I ever made.”

Through her hustle and dedication, she worked her way up to producer and gained experience with working on different types of production.

“Once I knew, okay production, television, and music was what I wanted to root myself in after a couple of years of trying it out. Part of it was that you know there are a lot of people who are just as good as you if not better, and believe me there were a lots of other people who were creatively better than me, way better than me but they were my peers and there was like that healthy dose of competition … and I wanted to you know keep up with them in a way. So part of it was healthy competition and part of it is somewhat healthy anxiety that self-motivates.”

Many students agreed that the webinar was a great learning experience because it showed them the hard work that it takes to be successful in this industry.

“Speaking from the perspective of an aspiring filmmaker, I was so honored to attend this webinar with Ms. Demme because there were a lot of inspiring messages that she told us.

“Going above and beyond is welcomed and the ability to reinvent yourself is crucial in developing work in this field. Getting face-to-face experience with workers in this field can also help provide you with a job. I learned so much from Ms. Demme in this field and also how to handle different situations that may arise in my career path,” said Senior, David Schoen.

To watch the full webinar please go to: https://sfcterriertv.com/

On April 22nd, at 2pm Professor Gewirtz will be joined by SFC Chief of Staff, Monique Pryor for the second webinar of his “Influencers in Communications” webinar series. Monique Pryor was on the show, The Amazing Race 16, where she was on a team of Moms/Attorneys.