A Terrier in the Capital 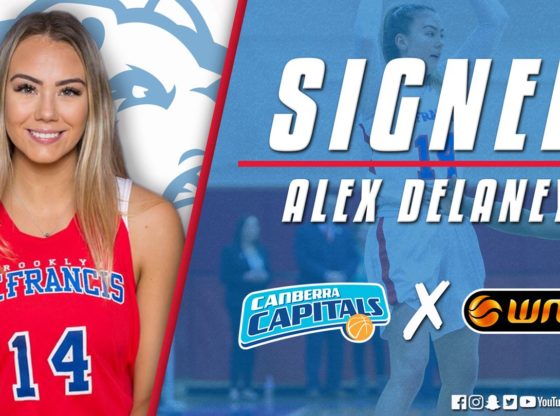 Former St. Francis Women’s basketball star and captain Alex Delaney (’18) has signed a professional contract to play for the Canberra Capitals in the Women’s National Basketball League (WNBL) for the 2019-20 season. Since graduating in May 2018, this is will be the third professional team that she will be playing for.

Prior to signing with the Capitals, Delaney had played for the Mackay Meteorettes, a part of the Queensland Basketball League in Australia, during the 2018-19 season. She finished off her season with the Meteorettes averaging 13 points and six rebounds per game while shooting 37% from beyond-the-arc.

She continued by stating, “I have heard excellent things about his style of play and I’m looking forward to working with him to develop my game and take it to the next level,”

This is not the first team in the WNBL that Delaney has been a part of, as she had originally played with the Sydney Uni Flames in late 2018.

As a St. Francis Terrier, Delaney finished her career being ranked fourth on the all-time career three-pointers list (168) and ranks eighth all-time on the program’s three-point field goal percentage list (.344). She would also go on to average 8.4 points-per-game and 3.7 rebounds per game during her four year career at St. Francis, while eventually averaging her career high in points per game (11.5) in her senior season.

It looks like this Terrier has found her way into the capital.