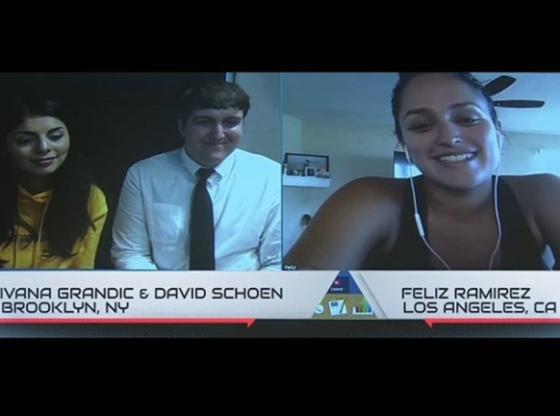 by David Schoen and Ivana Grandic

St. Francis College alumni Feliz Ramirez has moved onto a promising acting career, highlighted by her appearance on the ABC drama Grand Hotel. Ramirez was gracious to devote her time to a webcam interview with us, two members from the school’s television station, Terrier TV.

In an exclusive webcam interview with Terrier TV, Ramirez stated that she found an interest in acting at the age of four. Ramirez recalled that her father, a San Antonio-based producer, asked her to audition for a small part in a Spanish-speaking commercial and she hasn’t forgotten the experience since.

As a young girl with seven siblings, Feliz would imagine herself in the movies and TV shows she would watch. It was very “helpful,” Ramirez said, to “visualize” yourself in those prestigious situations looking forward into your career.

Feliz elaborated that attending St. Francis College was “the best learning experience” due to its prime location and close-knit atmosphere. As a note of encouragement, Feliz related to us, stating “I was sitting in the same seats you’re sitting in […] and I’m still sitting in seats that you would sit in, too.”

As mentioned above, Feliz appeared on the ABC show Grand Hotel as Carolina, the daughter of one of the show’s main characters, Gigi. According to SFC Today’s Nick Arias, Grand Hotel “is a drama series that focuses on the professional and personal lives of people who work at a family-run hotel in Miami Beach.”

Working alongside Eva Longoria, Feliz stated that she established a friendship with many of her Grand Hotel co-stars including Roselyn Sánchez. Though the show was a moderate success upon release, the show’s second season was cancelled on October 1st.

However, Feliz has kept in touch with the family she’s created. In comparison with the Terrier TV family here at St. Francis College, Feliz suggested that we “keep that family” here as she has with her endeavors.

When asked what’s the best advice she could give to college kids, Feliz replied with one simple word: “Network.” Elaborating on her advice, Ramirez continued by elaborating that us young college students to “meet people of all types, remember who they are, [and] give them your information.”

As an additional plug, Ramirez suggested using the Airtable app, which is programmed to accomplish many tasks, including the scheduling of film sessions and the composition of contact lists. Ramirez color-coordinates her contacts in the program in order to better recognize the attributes of her business acquaintances.

Ramirez stated that she was “so happy” to provide us with such an influential and informative interview, and twice she relayed that sentiment. We speak for the TV station when we say that we were honored to speak with Feliz Ramirez and we hope to see her here at her alma mater again soon.

You can catch the full televised interview with Feliz Ramirez, David Schoen, and Ivana Grandic on the SFCTerrierTV YouTube and Instagram pages.