“A PRESENT REFLECTION ON A PAST LIFE”

Home /News/“A PRESENT REFLECTION ON A PAST LIFE” 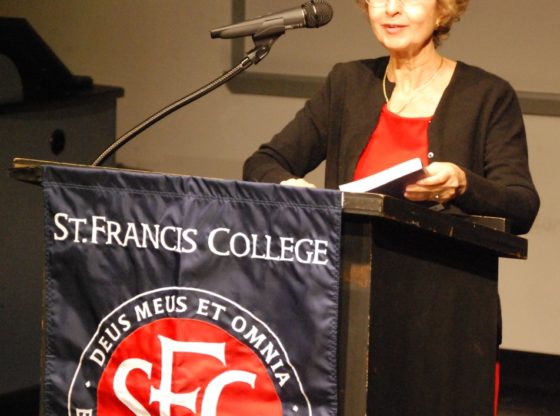 On March 17, 2011, the Maroney Theater opened its doors to acclaimed author Nahid Rachlin, whose memoir Persian Girls-an account of a young Nahid growing up in Iran- gave the audience a background into the hardships faced by a female in such a restrictive atmosphere.

Rachlin, who attended both Columbia University and Stanford, is the author of four novels, including Foreigner, and a collection of short stories; she has also been featured in both Common Boundary: Stories of Immigration (which tells the story of a mother coming to the United States to stay with her Americanized sister, and agonizes over what she finds) and Battle Runes: Writings on War – anthologies that gather stories based on each book’s particular theme.

Those that came to hear the story that she brought along in her reading of were not only equally as interested to listen to her reading, but the events itself can truly be described as inspirational – a feeling that was aroused not only by the fact that she read from the intended memoir, but because of the way in which she so aptly explained her story as one educated in the experiences and hardships of Iranian life.

This was done while also acknowledging that her book is a way of sharing indefatigable memories with the world – of a past that was written with truthfulness and emotional depth, yet read by the author with the same vigor one would with something “created,” like the plot of a novel.

The English Department’s Dr. Gregory Tague, who edited both books and also hosted the literary reading, was quite happy with Rachlin’s choice to come.

When reading Nahid Rachlin’s account of life with two separate “mothers” in Iran, her restrictive family that was immersed in the beliefs of both traditional Muslim and those of Americanized peoples, and gradually her finding refuge in the latter, a reader must sometimes be reminded that this narrative – so different from many of our own – is not composed of ideas, but facts and emotions that cannot be so perfectly produced and captured by the imagination.

Although literature – the prose of writing found in such works by Hemingway or Dostoevsky (two of the many authors that Rachlin described as influences) – offered a means of mental escape from the chaos that existed in Iran, writing also became a way for the author to bring out the essence of family life and memories that cut right through the difficulties caused by the Shah and the violence of clashing political parties – through whatever “bad” was ever encountered.

As Nahid Rachlin stated prior to the start of her reading, “Fiction was a way to understand what happened around me…It gave the harshest reality a beauty and meaning.”

There is actually a moment in the book that, when looking at the pictures of her two older sisters, I could only stop (as I imagine many others did) and think of the emotion conveyed in their young faces – in their contemplative stares that bring even greater reality to how Rachlin describes them, and their presence in her life; even without words, this was one of the more startling aspects of the book.

Such a message is made even more poignant by the concluding words of the book, encapsulating all that has happened in the preceding pages; in dedicating the book to her eldest sister, Rachlin writes that “Yes, dearest Pari, it is to bring you back to life that I write this book.” Although undoubtedly on a less personal level for the reader, this memoir does have this sort of penetrating quality to it, and to witness an author telling a story that is more than fiction – something that has actually occurred – was compelling, as a reader hardly ever expects a favorite movie or literary character to walk through the door.

SFC student Meagan Meehan expressed a similar feeling after hearing Rachlin read her chosen excerpts. “I was interested to hear how women were treated. I had read Reading Lolita in Tehran, and based on that I had some idea of what the author was talking about. It is interesting how reading something like that in a book impacts you emotionally, but it hits you that much more when someone is reading it before you.”

Rachlin actually does something like this in her memoir, which in turn provides a bit of an explanation to this novel-like quality in her writing; for example, she explains how she would take the example of her family’s servant, Ali, and turn him into a fictionalized character that was molded by a creative story, but based on actual circumstance. Such stories, as she writes, were always considered to be submitted for school assignments.

Rachlin’s book has been translated into numerous languages, such as Portuguese and Dutch; later on she expressed her sadness that none of her novels have yet to pass censorship in Iran (a topic she sometimes alludes to in the book, as certain kinds of writing would be perceived as “anti-government,” fearful of arousing a sense of rebellion in the people and therefore disallowed in the country), and has thus never been translated into her native Farsi.

As Nahid Rachlin came to the microphone, she distinguished, amongst the other topics she discussed, how much more difficult it was for her to write Persian Girls in contrast to a work of fiction; while people like Sartre go forward and write autobiographical accounts of themselves, Rachlin seems to decide against this in her book, and instead combines her talent for story telling and circumstances of her life to create something beautiful and engaging.

She then proceeded to her reading, choosing certain passages from her book that gave chronological glimpses into both the horrors and joys of her life; from her father’s decision to introduce to the young Nahid her true mother and siblings in Ahvaz, to her eldest sister’s “senseless” reaction to the affluent suitor introduced to Pari as a potential husband (her family still believed in the prospect of arranged marriage), this succession of events highlights the areas of the book that I would imagine have especial significance to the author. .

While Rachlin continued to read she led the audience through the different happenings in her life, everyone was not only engaged in what was spoken about by the author, but was more so invited to detect what the words implied about the overall story – that as told by the memoir.

For example, Rachlin’s words brought forward certain issues that were entrenched in the book – issues like the practice of arranged marriage, anti-American attitudes among certain semi-Americanized Iranian societies, and especially the desire to move against societal norms and be freed by the emotions, and not controlled the laws that ruled the imaginative spirit.

The author discusses the sense of isolation, of being either in her homeland, where the norms are restrictive and suffocating, the laws unbending, and her lost identity while an American student; she perceives her father as somewhat controlling, yet finds good within him later on – much like what her writing seems to do.

As Persian Girls deals more with choices than the more religious beliefs in personal destiny, but does give the reader a chance to see how the young Nahid shaped her life by choice and action, her answer still somewhat surprised me.

When I asked her about what, after everything that happened, she believed her destiny to be, she stated that “After all of this, I don’t believe in destiny in a “real” way. There is so much out of your control. Sometimes, I wonder how something can happen, but then must accept what does happen; sometimes [though], I can let myself believe that there is destiny.”

After reading Persian Girls, the inspiration is definitely there to create a life that is shaped by a person’s desires and aspirations; what Nahid Rachlin does not let the reader forget, though, is that hardship and difficulty will always be present, and will most likely be an influential force in the shaping of that life, whether it remains or not. Although, that never seemed to stop her for long.

So, after reading the book and meeting the author, I would definitely recommend the memoir, and you might as well try reading some of her other works as well; this is definitely different from reading a nineteenth century novel, but in a good way.