A new club comes to SFC 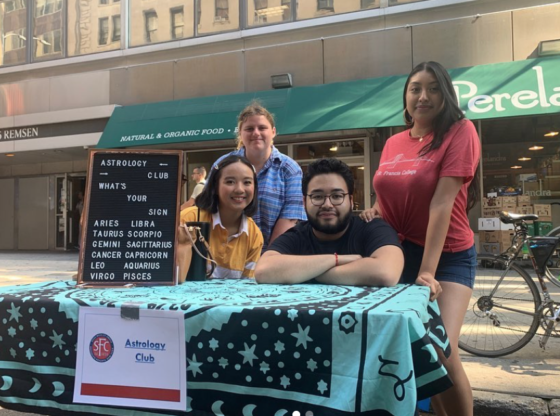 The Astrology Club founded by St. Francis Juniors, Henry Jimenez and Jenny Sellitto, made its first debut at Terrier Tuesday.

Students interested in learning more about astrology and the zodiac, signed up to read charts and spend time with other amateur astrologers.

“The astrology club is a safe place to let the mind wander. Astrology club was created to be able to help interpret exactly how the universe affects us, and to build connections with others based on the mutual interest in something other than the cultural norm. Through the establishment, we hope to help others further understand their identity, through an astrological perspective,” mentioned Henry Jimenez.

During their first meeting, Terriers guessed each other’s zodiac signs and discussed upcoming events for the Astrology Club.

The Astrology Club plans to host a Matchmaking Zodiac game, where students will participate in a matchmaking event, but instead of matching based off their likes and dislikes, they would instead focus on their astrological compatibility.

Club President Henry Jimenez and Club Vice President Jenny Sellitto, were able to share their love of astrology and the zodiac with other St. Francis Terriers. “The astrology clubs first meeting was a huge success,” stated Henry.

“At the end of the first meeting, where we guessed each other’s signs, I handed out an experience survey to gage the reaction of the attendees after the first club meeting. They were overwhelmingly positive.”

After reading the positive feedback received from attendees, Astrology Club VP Jenny stated, “I think it’s going to be a popular club, everyone wants to know more about it. Even if they don’t know enough about astrology, they know enough astrology meme culture, that they want to be in on the jokes, and know what they are about.”

With their next meeting October 17th, Henry and Jenny want all Terriers who are interested in learning more about astrology or enjoy laughing at astrological memes to join and follow SFC’s Astrology Club on Instagram, @sfcastrology, and connect with other amateur astrologers.