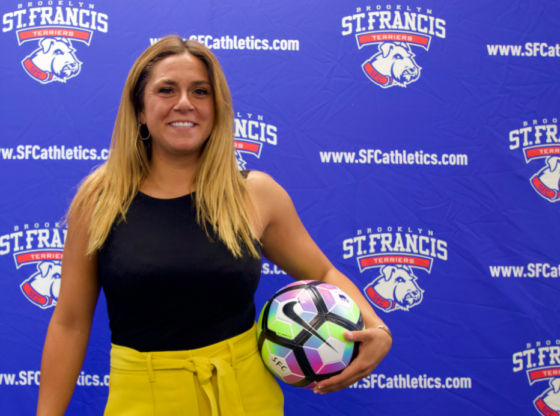 After the addition of a women’s soccer team to St. Francis College, Director of Athletics Irma Garcia named Justine Lombardi as head coach.

The program is set to start in fall 2019 and Lombardi has many goals in mind for her team.

Lombardi said: “Even though I don’t have the team set I obviously have high expectations. I’m very familiar with the conference [NEC]. I think it is a winnable conference.

“With this team that I’m putting together, that I’m building, I think that we will be competitive in the conference.”

Lombardi’s move to New York City is her first time living outside of Connecticut.

Lombardi attended Quinnipiac University. She played soccer for the university and was a four year starter and team captain.

She then served as an assistant women’s soccer coach at her alma mater for six seasons.

“I started coaching in college, initially just to make extra money … I really enjoyed it and ended up my senior year taking my own team.”

She continued: “I can’t wait for them [the recruits] to actually officially sign, which will happen in November, and for them to start coming in to take some of the attention away from me.

“As much as I love this whole experience and process, I want the focus to be on the team …

“They [challenges] come up everyday, you just take it day by day, everybody here in this office, and in the school has been very supportive of me.”

This month the future Terriers will sign their National Letters of Intent and we will begin to see the team that Coach Lombardi has been putting together.

“A thing that is important for me is that they love this school, so they really are going to contribute to the close family environment that is already here and they want to be apart of it.”