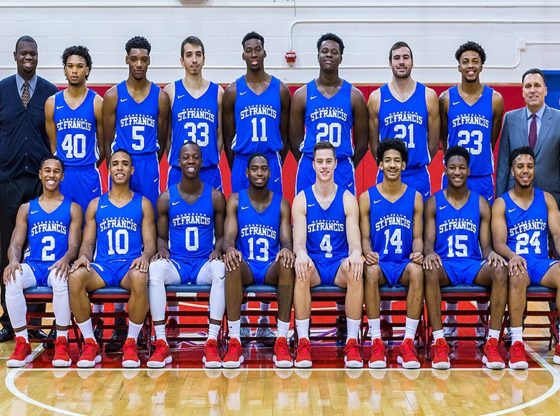 The St. Francis College Men’s Basketball team’s season came to an end last week after they lost to the LIU Blackbirds in the quarterfinals on February 28th.

The Terriers opened the 2017-2018 season in November of 2017 against Duquesne University in Pittsburgh, PA.  Despite their best efforts the team fell to the Duquesne Dukes 80-70.

The team took their first win of the season at their home opener on November 19th against Brown University.  The Terriers were led by sophomore Rasheem Dunn and freshman Jalen Jordan who had 23 and 22 points respectively.

A highlight of the 2017 portion of the season came in December when freshman guard Josh Nicholas made ESPN SportsCenter’s top ten plays for his incredible dunk against Notre Dame.  The dunk was originally listed as fifth but was moved up to third.

January was a good month for the St. Francis Men’s Basketball team with the team defeating Mount St. Mary’s, Bryant, and Fairleigh Dickinson putting them on a three game win streak.

By mid February the Terriers found themselves in a four way tie for second place in the NEC after defeating the LIU Blackbirds 84-79.

The Terriers went on to beat Fairleigh Dickinson University in a key victory on senior day that kept the Terriers in second place in the NEC.  The team honored its four seniors, Gunnar Olafsson, D.J. Porter, Sam Harris, and Jagos Lasic.

Jalen Jordan picked up his third NEC Rookie of the week award after averaging 15 point per game and helping the Terriers capture the two important wins that put them in second place.

The NEC preseason poll picked the St. Francis Men’s Basketball team to be in tenth but the Terriers headed into the NEC tournament as the fifth seed.

Following the tough loss against the LIU Blackbird’s in the quarterfinals, head coach Glenn Braica said, “I’m proud of my guys for this year, I think we had a pretty good season for a team that wasn’t picked to do much.”

He continued on to say, “The only thing that bothers me is I would’ve liked to have ended it a lot better. That’s disappointing for me because I would’ve liked for them to have ended a little bit better. I don’t know what it was, I don’t know if we ran out of gas. We didn’t feel the juice. We looked like we were a little beat up today. I think we’ll learn from it, we have a bright future, we have a lot of good young players, and we really look forward to moving forward after the season going into next year.”

The Terriers have a lot of returning talent and are expecting good outcomes in the 2018-2019 season.