A “GRONKIN” SWEET WIN FOR THE PATRIOTS 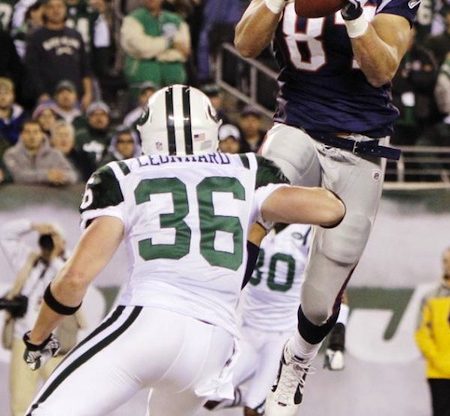 Tom Brady threw for 329 yards and three touchdowns as the New England Patriots swept the season series from the New York Jets for the first time since 2007, 37-16.

With the loss earlier by the Buffalo Bills, New England (6-3) broke a three-way-tie in the AFC East to take the lead. The Jets (5-4) had their three-game winning streak snapped.

The Jets took the ball first and dominated the Patriots defense to start the game. Mark Sanchez threw for 54 yards on the opening drive, but the Jets offense stalled six yards away from the end zone. Kicker Nick Folk failed to connect on a 24-yard field goal attempt to end the drive.

After New England scored two field goals, the Jets finally found the scoreboard in an unconventional way. Late in the second quarter, Brady committed an intentional grounding penalty in his own end zone, resulting in a safety to cut New England’s lead to 6-2.

New York would go on to take their first lead of the game on the following drive when Sanchez ran in a touchdown from two yards out. After the extra point, New York led 9-6.

New England would go on to regain the lead just before halftime, however, when Brady orchestrated a six play, 58-yard drive that took only 1:11 off the clock. Brady found tight end Rob Gronkowski in between two defenders in the end zone to put the Patriots up 13-9.

Late in the third quarter, Brady found Gronkowski again in the end zone to put New England up 23-9. Gronkowski finished the game with 113 receiving yards.

Sanchez brought the Jets within a touchdown when he connected with Plaxico Burress in the end zone on the first play of the fourth quarter, capping off a 10 play, 71-yard drive.

New England would continue to torch the Jets secondary, however, with Brady throwing his third touchdown pass, this one an eight-yarder to Deion Branch to keep New England up by two scores.

Sanchez expanded the Patriots lead on the following drive when his pass intended for LaDanian Tomlinson was cut off by Rob Ninkovich, who rumbled 12 yards in for a defensive touchdown to put up the final score. New York travels to Denver to take on the Broncos (4-5) on Thursday night while New England travels to Kansas City (4-5)

NO ELITE MAGIC THIS TIME AS GIANTS LOSE TO 49ERS
ARMY SURGES IN SECOND HALF TO PUT AWAY ST. FRANCIS 59-43