A Brief Look on how SFC Celebrated Veteran’s Day 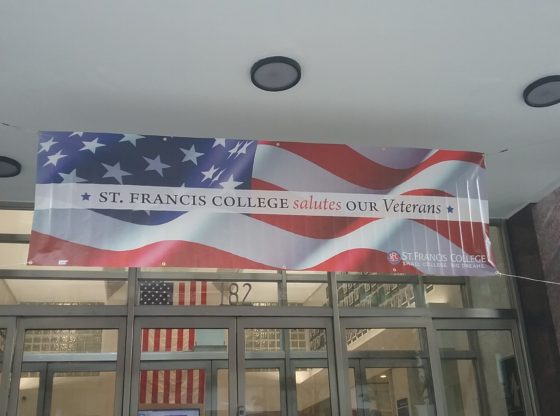 On Friday November 10, in commemoration of Veterans Day, St. Francis College held an event in the Callahan Center. There was an opening Prayer at 10 am, followed by a student performance of the National Anthem and then the audience recited the Pledge of Allegiance. SFC veterans were honored and thanked for their services throughout the program, several SFC veteran alumni shared their experiences at the college as well. Other speakers included Dr. Peter Liebman ’71, Dr. Michele Hirsch, and Edward T. Reilly ’68.

Various topics were addressed, such as programs that support veterans, and new scholarships available at SFC. Troops to Teachers, established in the early 90’s to assist transitioning service members in beginning new careers as school teachers, was a program advocated throughout the event. Also, a new scholarship was revealed in memory of Dr. Donald Metz, a man who served both our country and the SFC community. The endowed scholarship is in his name, and junior biology major Aisha Yazdani was the first to receive this scholarship.

This was followed by a mass for the intentions of St. Francis College veterans living and deceased. The event gave us a special look at our veterans and will remind us of the significance of the holiday.

Have you Heard about the St. Francis College Tuition Freeze?
Getting to know Victor Cruz