MAKAYA IS READY TO HUNT IN THE NEC PLAYOFFS

Home /Sports/MAKAYA IS READY TO HUNT IN THE NEC PLAYOFFS 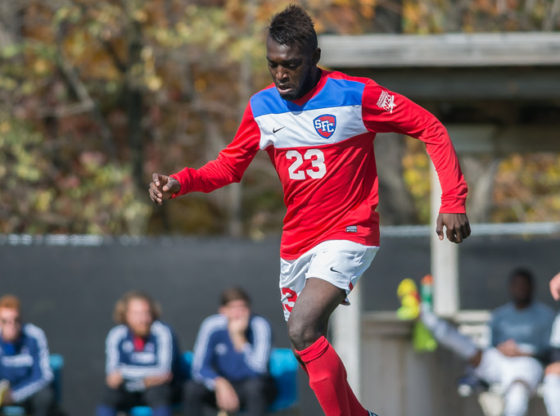 Senior midfielder John Makaya has accomplished a lot during his years on the St. Francis College Terriers men’s soccer team, but he is not satisfied with his performance so far this season.

Hailing from Montpellier, France — Makaya may be oceans away from home but he still manages to balance school, soccer, two jobs, an internship and keeping up with four different languages — French, Spanish, English and Lingala.

“I have to be very organized because I have school and practice every day,” Makaya said.

According to Makaya, it was his correspondence with teammate Cyril Coisne that led him to St. Francis. Knowing that living in New York would grant many opportunities and networking possibilities also influenced his decision. It did not hurt that St. Francis offered him a full scholarship as well.

Like many of his teammates, and classmates, Makaya is also dealing with living on foreign land miles away from his family.

“Before coming to the United States, I lived in Spain for one year, right after that I came to America,” he said. “Before visiting France over the summer, I was away from my family for more than two years. I miss my family all the time but I’m getting used to it,” he continued.

“Sometimes you want more than Skype but you do what you got to do. You have to understand that you’re doing it for your goal; to learn more from life, to get more experiences. It makes you learn how to be more mature, how to find solutions when there is a problem. Also, it’s really tough when you don’t have your mother here to cook for you.”

Makaya may not be having his best season ever. In 2014, Makaya (then a junior) ranked third in the Northeast Conference with eight goals, which led the Terriers. Makaya also notched three game-winning goals, including two in back-to-back games against Saint Peter’s and Rider.

Makaya also finished fifth in the NEC with 17 points (0.81 per game). However, with more playing positions this season (winger, center midfielder and forward) he is currently averaging 2.14 shots per game, 0.14 in both goals and assists per game and 0.43 points per game.

“Honestly, I’m not happy with my season for now, last year was a completely different season. I scored more goals, this year I played more defense, I had to adapt myself,” he said.

“I don’t have as many goals as last year, some games I did well and some I didn’t. We have a saying in France: l’important c’est pas la chute, mais l’atterrissage — the important thing is not the fall, but the landing. I’m a person who likes to be perfect and I’m not happy with myself. I want to be perfect but no one is perfect. If you want to be a champion you have to be stricter with yourself,” said Makaya of this season’s performance.

Family and prayer give Makaya motivation when he feels his best is not good enough.

“I pray and think about my family. I have many brothers and sisters and I am motivated by them,” he said. “You understand that you need to be strong mentally and focus. Before every game I go [with fellow teammate] Andrew Nestor to the chapel. I also listen to religious, African and French music,” he continued.

In addition to being influenced by soccer greats such as Zinedine Zidane, Ronaldinho de Assis Moreira, Diego Maradona, Eden Hazard, and Pele, Makaya cites his coach Tom Giovatto as being the one to help him bring focus and self-control to the field. Makaya especially thanks Assistant coach Sinan Selmani for working with him on his progression as a soccer player and teaching him how to “be a fighter on the field; to be a disciplined hunter.”

After a tough lost against [long-time rival] Long Island University’s Blackbirds [11-5-2, 7-0-0] in the Battle of Brooklyn, the St. Francis Brooklyn Terriers [10-4-3, 3-2-2], look to put the loss behind them and prepare for their upcoming rematch against the same Blackbirds at the NEC semifinals.

“The team is ready but we need to be more disciplined on the field if we want to win. More hungry,” Makaya said.

Makaya is not the only transfer at SFC to experience long distance relationships with his immediate family, or the struggles of having to juggle school, work and being part of a division one team.

Nevertheless, Makaya is a prime example of the Franciscan spirit and perseverance that the students at the small college of big dreams exude.