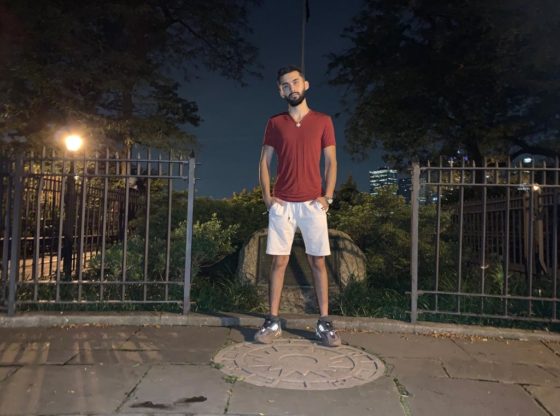 Rafael Israilov, also known as 3rdSyllable, is a currently a full-time college student, optician, and an aspiring rapper.

He chose the name 3rdSyllable because he has 3 syllables in his first name, and 3 is his favourite number.

3rdSyllable is studying to get his license while writing songs on the side.

He said that he became interested in music as a result of his brother pranking him when he was a child:

“My brother honestly got me into writing music when I was 5 years old, when he played a joke on me saying he told Eminem that I wrote his daughter a song for her birthday.

“I was scared because I didnt want to let either of them down, so I spent the entire Saturday just writing as much as possible. My mother made breakfast and it took them a while to finally get me to come sit down and eat with them.

“Ever since then I’ve just had a passion for writing. I would write short stories, poems, lyrics and even wrote a mini novel for a teacher of mine in elementary school.

“So all this said, it’s safe to say that everyone in my family supports my music aspirations and as do my close circle of friends.

My mother always says ‘you’re honestly good, I mean, I dont always fully understand all your lyrics, but I know you’re good. Question is how do we make you famous already?’

“It always makes me happy to know I have everyone around me backing me up.”

“Other than making music I go to school and have one semester left before I graduate and take my boards to become a licensed optician…if you have any optical needs I’m your guy,” Rafael said.

“I got into that because I knew I needed a safety net and a financial support system if I was gonna continue to make music, so my father recommended I look into this field and after much consideration I gave it a shot and now I genuinely enjoy it.”

“Aside from that though I am super into boxing. Ever since I was a kid I loved it and my love for it grew even moreso now. I gotta get into a boxing gym once I graduate, that’s definitely a big goal outside of making music.”

In regards to finding a balance between finishing his degree and making music, Rafael said that “it does get really hard and stressful especially when it comes time to exams”, but he makes time for both.

“Whenever I have free time whether at night, super early in the morning or on a day off, I devote a few hours to record multiple tracks and I try my best to have at least 2 or 3 tracks that are semi finished, so that when I want to release something, I have those tracks ready to go. All I would need to do is mix and master them fully and upload.

“Recently I haven’t recorded any new music because I already planned the next 3-4 months worth of music releases.

“At this point I’m trying to figure out how to properly market myself because most people who listen to me and support me want me to actually grow my audience because they genuinely enjoy my sound and witness how much I [have improved].

When it comes to school, Rafael candidly admit that he considers hismelf a “bottom tier student”

“I barely ever study but I always get all my work done and pass my classes. Studying was just a habit I could never really get into and it’s honestly because I’m too lazy to do it.

“On exam days I wake up at 4 or 5 AM and just study up until it’s time to take the test. Always works for me, but don’t do it!”

Still, 3rd Syllable’s advice for students is “if you’re ready to do the work…then you can make it in anything that you do.”