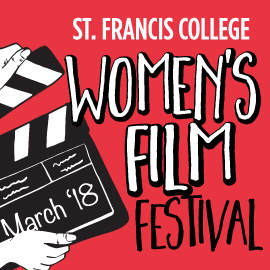 At 2pm on Monday in Founders Hall, Shoes (1916) by Silent Film director Louis Weber will be screened with live music accompaniment by pianist Ben Model! At 4pm the same day, there will be a panel on the Past, Present, and Future of Women’s Film Production with Academy Award nominee Immy Humes and VR Innovator Theresa Loong.

In addition to film screenings, on Tuesday workshops on how to craft a personal brand in social media and how to pitch a film or business will be held by Seed & Spark crowdfunding guru Christina Raia. Tuesday evening will feature an interactive panel called #ActToo: Capturing the Momentum of the #MeToo Movement and will be run by Breakthrough.

Wednesday March 21 will have film screenings as well as a panel titled Making Media for Social Change with Documentary Filmmakers including Lisa Russell, who will be screening Heroines of Health.

Another panel, Manage your Entertainment Business with Thembisa Mshaka and Lauren Magura of Cinematcher, is planned for the last day of the film festival, Thursday March 22. Afterwards, there will be a screening and a ceremony during which the winners of the 3rd Annual Women’s Film Festival are awarded.

The 3rd Annual Women’s Film Festival would like to acknowledge and thank Academic Affairs, The Communication Arts Department, The Center for Entrepreneurship, The Honors Program, and the Women and Gender Studies Minor for making this possible!