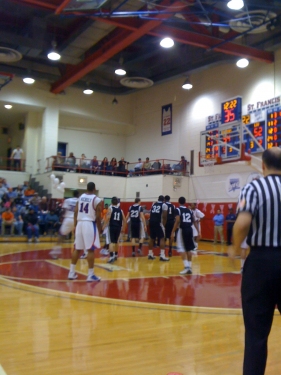 Emotions ran high in a near capacity crowd game in the 36th annual “Battle of Brooklyn” as the LIU Blackbirds defeated the St. Francis College Terriers 82 to 80 in a crucial conference match up.

Both teams opened up the first half aggressively, looking to shoot fast and shoot often. The two Brooklyn rivals seemed to be trading baskets every possession, driving to the basket at will.

Freshman forward Matt Milk made his 12th start at center, finding his rhythm early, shooting a perfect 3 of 3 from the field by the half. Senior guard Ricky Cadell, who moved to third place in the St. Francis College all-time scoring leaders, struggled to find his shot in the first shooting only three for 11. Guard Dre Calloway, who did not start today’s game, also shot a perfect three for three by the half. Calloway finished with 13 points and seven assists.

LIU opened up the second half on an 13-5 run, out-rebounding and out-hustling the Terriers, capitalizing on crucial second chance points. LIU forward Julian Boyd was the main facilitator of their hustle, finishing with a game high 19 points and eight rebounds.

The Terriers however responded with eight unanswered points, sparked by two timely three pointers by guards Travis Nichols and Akeem Bennett. It wasn’t long before the Blackbirds regained the lead with a pair of three point plays.

An easy basket by LIU and a key late foul put the Blackbirds up four with a minute to go in second half, a rather large lead in today’s game. The largest lead was only seven points by LIU early in the second.

Bennett hit a quick three after a time out to cut the lead to one with 36 seconds on the clock, before an intentional foul put LIU back up by two. Johnson scored the tieing basket on a put-back with only 7 seconds to go. LIU guard C.J Garner hushed frenzied crowd with a beautiful fall back jumper with 0.6 on the clock; the winning basket as Cadell failed to make to a last minute prayer shot.