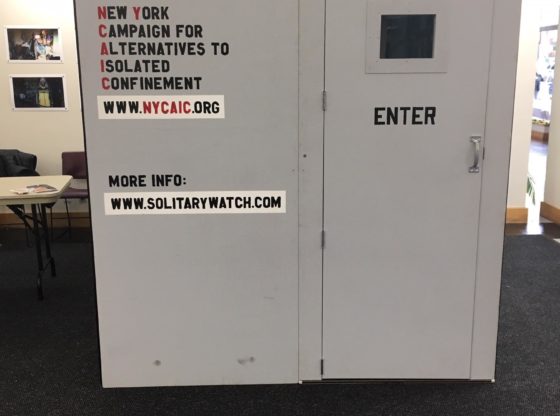 Felix Colon, formerly incarcerated SFC Alumni said, “it takes a village to raise a child. They don’t stop being our children because they went to prison…like it or not, they will come back to the village, may as well welcome them with open arms.”

Felix graduated last May with a Bachelor’s
of Arts in Sociology.

He spent 17 years in prison for a felony offense.

Colon was one of many participants and panel speakers presenting at the Inaugural Prison Reform and Re-Entry Possibilities two day conference held at St.Francis on November 14 and 15, 2018.

The conference was organized by St. Francis College Office of the President, the Post Prison Program in conjunction with Dr. Michelle Gantt of Brooklyn’s Metropolitan Detention Center, and SFC Alum Johnny Perez.

Many students, including myself, attending St. Francis prior to the event were not aware of the fact that there is a Post Prison Program at the college

The program is co-directed by Drs. Emily Horowitz and Eric Platt, both professors at SFC.

The goals of the program include the promotion of college degree completion among formerly incarcerated people, decreasing recidivism while increasing employment opportunities and earnings potential, improving quality-of-life and promoting public safety in neighborhoods disproportionately affected by crime and incarceration.

While attending the conference l was surprised to discover how many classmates were formerly incarcerated.

Individuals that l had met and considered cool and down to earth, mature and intelligent, highly articulate and even comical — students like Felix Colon ’18, and. Steuben Vega, a current St. Francis student.

Felix is still involved at SFC as a mentor and friend to the post-prison program.

He spent time in solitary confinement and said that, “ St.Francis College restored my faith
in people. After serving 17 years in jail l was cold.

“Society needs to understand that there is a lot of abuse in prisons and abuse is a reality.”

Steuben Vega pursued an education while incarcerated just to find out when he was released that the correspondence course degree he’d earned, (via a program that sent materials for a price to incarcerated men and women) was not a real degree.

After going through all this some people may have given up but Vega stated, “ Coming to Saint Francis was a blessing.

“l was still determined to pursue an education even if l had to start from the bottom.”

After doing time for a felony offense when he was young, as he says “an act that shamed my family, l wanted to give back to my community.”

One of the major themes of the conference classified  solitary confinement as torture.

Perez, also a graduate of the college, ’18, now works for the National Religious Campaign Against Torture, a national organization that opposes solitary confinement.

Both were very intense experiences equipped with voices of former inmates recounting stories of their time in solitary that came to life visually to the point where in one scene it felt as if l was actually floating high up to the ceiling.

All this while the voice of a man recounting his experiences with hallucinations after having been locked up in solitary for a long period of time plays in the background.

In the same scene the same individual
stated: “I thought l saw my mom in there with me.”

The nine minute virtual tour along with the tour of the replica solitary cell helped you to experience a visual and physical effect of what it feels like to be in a solitary confinement cell.

It was deep, claustrophobic, and scary.

The two day conference also had a film screening of the John Lucas documentary, The Cooler Bandits, which chronicles the lives of four black men in the criminal justice system.

There were also theatrical performances and several panel discussions with the purpose of educating those of us ignorant to the plight of those individuals navigating their way through the injustices of the penitentiary system both when they are in the system and when they are released.

One of the most profound lessons out of many that l was taught by Dr. Michelle Gantt of the Metropolitan Detention Center was of the effects of labeling a person released from prison a “convict”, “inmate”, or “ex con”.

These words are labels that continuously plague the life of an individual long after they have paid their debt to society.

“Formerly incarcerated” is the accepted terminology used in addressing and naming
those that have spent time in prison.

The focus of the event was to help foster understanding of the many different possibilities that exists for a supportive re-entry process for formerly incarcerated individuals.

St. Francis College and the Post-Prison Program help to do just that for many men and women seeking a second chance at life after making mistakes that carried heavy consequences for them in their youth.

If one has paid their debt to society is it fair to continuously make them pay long after they have been released?

Or is it more beneficial for us as a society to make sure that formerly incarcerated men and women receive true rehabilitation and education that will not only help them reintegrate into society but also join the workforce to become beneficial members working for the betterment of the society and not its detriment?

Dr. Emily Horowitz, the founder and co-director of the program says, “ the students have had a huge impact on faculty, staff, and students at St. Francis.

“The students in the program are dedicated and enthusiastic. Students and faculty are impressed by them, academically and personally, and when they find out they have been involved with the criminal justice system,
it changes the way they think about those they might have once dismissed or ignored – they realize that those with criminal justice involvement are the same as any other human being, and the same as themselves.

“No one should ever be defined by the worst thing they have ever done, and this program successfully shows to all those at St. Francis and beyond that everyone deserves a second chance and to be treated with compassion and forgiveness.”