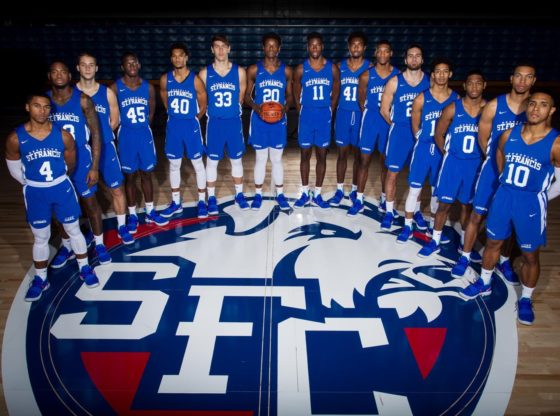 It’s been eight long months since the last time the Terrier’s Men’s Basketball team played a regular season game, and now, the wait is finally over.

This Wednesday, November 7th, 2018 at 7 pm, the Men’s basketball team will play their first game of the regular season as they take on Medgar Evers College at the Pope Physical Education Center.

The Men’s basketball team finished off last season with a record of 10-8 in conference play and was tied in 4th place in the final standings.

The Terriers last game was a loss to our rivals, LIU Brooklyn, in the first round of the NEC playoffs in February.

In the NEC Media Day, last month, the Terriers were ranked 7thin the conference amongst all the other head coaches.

They hope to prove the other teams wrong with the acquisition of six new players, as well as the improvement of the nine returning players.

The six new recruits to the team consists of two Freshmen, three juniors and a sophomore.

Freshmen combo guard Larry Moreno, a Brooklyn native who comes from the Brooklyn High School of Law & Technology where he scored over 2,000 points in his four years there.

Larry was also a starter for all four-years at the school and was named a Class A All-New York State Teamer in both his Junior and Senior year. Known for his ability to score, Moreno is a promising young player for the Terriers.

“Larry will have to get a bit stronger, but he has tremendous potential as a college player once he gets some experience at this level,” said Coach Braica to SFC athletics.

Another promising Freshmen guard to the team is Stevan Krtinic, a 6’5” point guard who last played for the Carnegie Schools in Riverside, CA.

Krtinic is originally from Novi Sad, Serbia, and was named to Division 4A first team in California. Braica said to SFC Athletics: “Stevan’s another player who shoots the ball well and is a good passer,” and “He is also very strong going to the basket, and has nice size for a guard,”

One of the juniors that was added to the team is Rosel Hurley, who Coach Braica is excited to see play this season.

“He’s a very physical driver who attacks the rim,” said Coach Braica said to SFC athletics “and he handles and passes the ball very well for a guy that size.”

Jordan Williams, a 6’4” guard, is a sophomore that graduated from St. Edmunds Prep in 2017 but sat out his freshman year here at St. Francis College.

“Jordan has looked good during the offseason,” said Braica to SFC athletics, “and we look forward to his progression in his first year at the Division I level.”

The Terriers also acquired two big men this off season, Christian Rohlehr and Deniz Celen, who can help protect the paint and stretch the floor.

Coach Braica said to SFC athletics: “We really haven’t had a shot-blocker like Christian here since Amdy Fall graduated, and that should certainly help improve our half-court defense.”

Deniz Celen, who’s from Ankara, Turkey, transferred from Harcum College in Pennsylvania. During his time at Harcum College, Celen showed amazing basketball IQ and passing ability as he finished second on his team in assists.

Standing at 6’8”, Celen is known for his ability to hit three pointers and rebounding as well. Coach Braica believes that Celen can play both the Power Forward and Center positions.

Besides the new recruits to the team, two familiar faces on the team are returning starters, Graduate Student Glenn Sanabria and Sophomore Guard Jalen Jordan.

Glenn Sanabria has proven to be an outstanding athlete and a leader on the team. “Glenn is a known quantity, he’s a proven player in the league, he’s had success” said Coach Braica to the Terrier Sports Network (TSN).

Sanabria did not make the All-NEC team last season, which was a surprise to many people around the league. “I was disappointed that Glenn wasn’t selected to one of the All-Conference teams,” Braica said to SFC athletics. “He’s one of the best, all-around guards in the conference and had a terrific year for us.”

Jalen Jordan was a member of the Terrier squad last season who made an All-Conference team, making the NEC’s All-Rookie Team. Jordan was one of the players in the conference that lead in both three point and free throw percentage.

As we inch closer to the start of the new season, the players are anxiously waiting to get back on the court. With a new team staring a brand-new season, they each have the same goal that they want to achieve, and that is to have a winning season.

Junior Forward Milija Cosic said Terrier Sports Network (TSN) “I went to the weight room [this off season] to prepare for the next season because we expect this to be a winning season this year.”

“Well first, you want to come into every season winning a championship. I think that’s been my main focus since I’ve been here.” said Glenn Sanabria to the Terrier Sports Network (TSN)