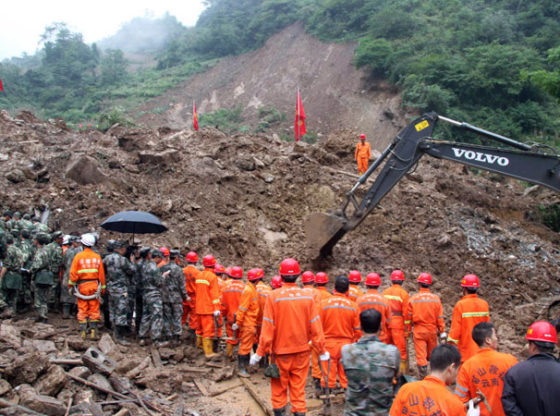 Many people can say they are sad to see 2015 come to an end and others are relieved 2015 is over with. Amongst the many that are happy to say goodbye to this year are the citizens of China.

One of China’s many disasters this year was a landslide on December 21 in the predominantly modernized city of Shenzhen, with red muddy debris covering what was once a thriving city.

81 people went missing and 33 buildings were destroyed, according to authorities.

Shenzhen resident Ms. Mo did not know what the noise was. She thought it was firecrackers until she saw people running.

“Only then did she realize a landslide was coming their way,” she said according to the New York Times. “We were still in pajamas and slippers. We had no time to get our stuff at home and immediately ran.”

As China handles the heartbreaking events that occurred on December 21, they are no stranger to catastrophe. 2015 marked a tragic year for China starting off with New Year’s Day.

While crowds gathered in Shanghai to watch a light show that began at midnight on December 31, 2014, many were crushed as they made their way up the steps where the light show took place. 36 died and 47 were injured as everyone stampeded their way down the steps, according to police. Most were in their early teens and 20s. The chaos that occurred was due to a riot that many partygoers contributed to by throwing fake $100 bills into the air, thus causing a stampede.

Just nearly five months after the blood bath that took place on New Years Eve, another catastrophe developed on June 2, 2015. The Oriental Star — a 251-foot long cruise ship — took sail and a tornado was reported shortly after which caused 74 mile per hour winds, according to officials.

In Jianli, the cruise ship that had 456 passengers on it had capsized in the cold choppy Yangtze river — the world’s third longest river. With only 14 of the 456 passengers surviving, 430 had not been recovered. A tour employee Zhang Hui, 43, who was of the few to have survived said to another colleague: “We’ve got a big problem,” according to the New York Times.

He grabbed a life vest, which kept him afloat as wave after wave crashed over him.

“I told myself, ‘Just keep going,” Hui said according to the New York Times.

The transportation accident that took place on June 2 was the most tremendous incident in China since a train crash in the city of Wenzhou in 2011, killing 40 people according to authorities.

On August 30 Rui Hai, a thriving developing warehouse in Tianjin, suffered from an explosion which left 150 dead and more than 700 injured, police said. Not only did this cause an economic destruction for the busy city of Tianjin, but the residents are still suffering from the hazardous toxic substances that came from the explosion. Amongst the 3,000 tons of substances that caused the explosion were 700 tons of sodium cyanide and 1,300 tons of fertilizer nitrates, officials said.

“We had no idea it was a warehouse for dangerous goods,” Quan Li, a 25-year-old firefighter said according to the New York Times.

Just days before the incident that took place on December 21, 19 coal miners were trapped for more than 24 hours in Beijing. They were presumed dead shortly after. An explosion from the overheating inside the private mines trapped 52 workers and only 33 were safely rescued, according to officials.

The unsafe conditions in these coal mines are usually unreported which doesn’t help the issue.

“There are just too many accidents,” a former miner said according to the New York Times. “Every day the workers have to get in a car and are lowered hundreds of meters underground. Sometimes they lose control of the cars and the workers die.”

It’s an issue going unnoticed in many cases, especially in private owned mines like the one in Beijing.

The only thing China citizens can do now is hope for 2016 to be a better year.