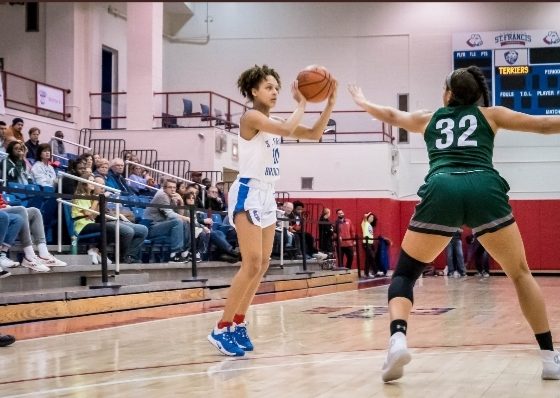 The St. Francis Brooklyn Terriers has done it again! They recorded their second win earlier today as they defeated the Loyola Greyhounds 89-78.

In the second quarter, the Terriers kept their lead, but the Greyhounds were not giving up without a fight. In the fourth minute, the Greyhounds managed to equalize and immediately went on a 5-0 run, but this victory was short-lived as the Terriers stormed back with a 16-9 run to finish at halftime with a 44-39 lead.

In the fourth, the Greyhounds totaled 19 points in their effort to come back, but the Terriers tallied 23 points as they took the victory, 89-78.

Karcz records her second double-double for the season scoring 24 points and grabbing 11 rebounds. She played 31 minutes in which she also assisted in six baskets and recorded six steals.

Therien finished with 12 points in 19 minutes of play. Both her and Niles grabbed three rebounds. Niles also recorded six points in 25 minutes and scored four perfect shots at the free-throw line.

Connolly played 24 minutes in which she finished with 11 points. She also grabbed six rebounds and assisted in one basket. Connolly also recorded two perfect shots at the free-throw line.

Johnson led her team with a high of 25 points. She played 40 minutes grabbing three rebounds and assisting in four baskets. She also landed two of four shots at the free-throw line. Johnson is now ranked the eighth on the all-time St. Francis scoring list.

Lassen played 37 minutes in which she scored 23 points. She also grabbed 9 rebounds, assisted in three baskets and landed nine of 11 shots at the free-throw line.

Jordan recorded her first double-double in her NCAA DI career with 11 points and 13 rebounds. She recorded 10 defensive and three offensive rebounds.

Terriers head coach Linda Cimino said that she was happy with her team’s effort and thought that they did well as a team.

The Terriers will be back in action against the New Jersey Institute of Technology Highlanders (NJIT) on Tuesday, November 26, at NJIT Wellness and Events Center in Newark, NJ. Game tips off at 7 p.m.