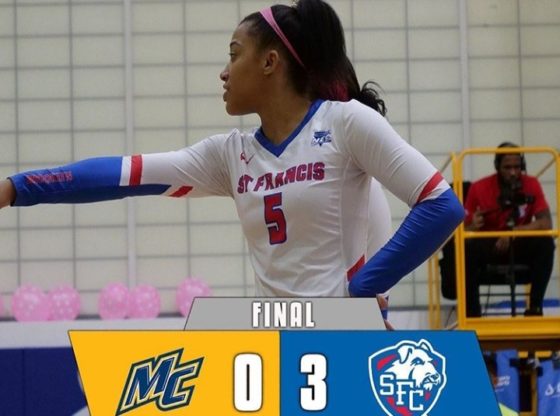 Earlier this evening, the St. Francis College Women’s Volleyball celebrated Senior Day in style as they concluded the 2019 season with a win against the Merrimack Warriors in three consecutive sets. Although the Terriers failed to make the playoffs, they recorded 14 victories this season, the highest win total since 1999.

However, in the third set, the Warriors made a comeback as they went on an 8-3 run bringing the score to 11-15. The Terriers in response to this stormed back with a 10-4 run as they claimed the third and final set, 25-22.

Middle blocker Wies Hurkmans finished the 2019 season with the third-highest block total as she recorded 65.0. She also recorded 143 kills, 12 digs, and 178.5 points.

Middle blocker Taris Pittman led her team with 98.0 blocks this season. She also came in fourth with 196 kills and recorded 24 digs and 246.0 points.

Outsider hitter Lauren Montgomery finished the season with the fourth-highest block total as she recorded tied with Hurkmans with 65.0 blocks. She also recorded 131 digs and the third-highest kills with 213 and tallied 259.5 points.

Opposite hitter Sidney Colvey finished the season with 15.0 blocks and 13 digs. She also recorded 62 kills and 72.5 points.