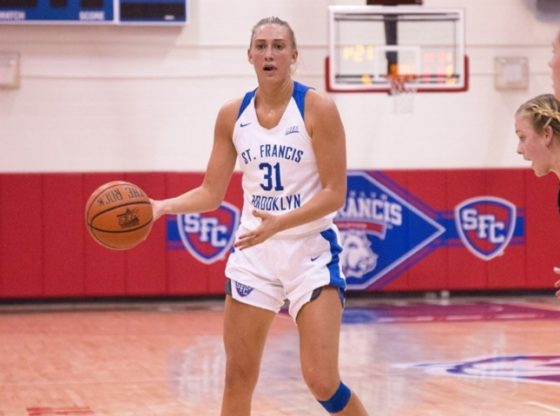 Earlier this evening the St. Francis Brooklyn Terriers hosted the Army Black Knights of the Patriot League at the Pope Education Center Brooklyn Heights, NY. The Terriers defeated the Army 70-64 to recorded their first win of the season.

Starting the second quarter, both sides found it a bit hard to record any points within the first couple minutes, but the Sarah Bohn of the Army kicked things off with two good consecutive three-point shots. This gave the Army a five-point lead. They maintained their lead throughout but with one minute and 19 seconds on the clock, Nevena Dimitrijevic started the Terriers comeback with a good three-point shot off the assist of Abby Anderson. The Terriers then went on a 6-0 run with Jade Johnson throwing up two perfect shots at the free-throw line to equalize at halftime, 37-37.

The Army launched its attack with a 14-2 run as they stormed the third quarter. The Terriers trailed by six points as the score was then 49-55. In response, the Terriers made a strong comeback in the fourth quarter as they went on a 21-9 run to win the contest with a six-point lead, 70-64.

Hunter played for 37 minutes in which she led her team with a double-double as she recorded 16 points and grabbed 17 rebounds. She assisted in four baskets.

Hall played for 27 minutes in which she finished with 13 points. She also grabbed four rebounds and assisted in one basket.

Fallon played for 32 minutes. She tallied 10 points, grabbed six rebounds and assisted in one basket.

Tacka played for 28 minutes in which she scored eight points and grabbed four rebounds.

For the Terriers, the top scores and performers were Nevena Dimitrijevic, Ally Lassen, Jade Johnson, Jenna Jordan, and Alyssa Fisher.

Dimitrijevic played 39 minutes in which she led her team with a high of 21 points. She also grabbed eight rebounds, recorded two steals and assisted in seven baskets. Dimitrijevic also landed a perfect two shots at the free-throw line.

Johnson played 39 minutes finishing with 14 points. She grabbed four rebounds, recorded one steal and assisted in five baskets. She also landed four of six shots at the free-throw line.

Jordan played 29 minutes in which she recorded 11 points. She grabbed nine rebounds and recorded three steals.

The Terriers will be back in action on Sunday, November 24, at 1 p.m. as they host Loyola of the Patriot League at the Pope Physical Education Center, Brooklyn Heights, NY.