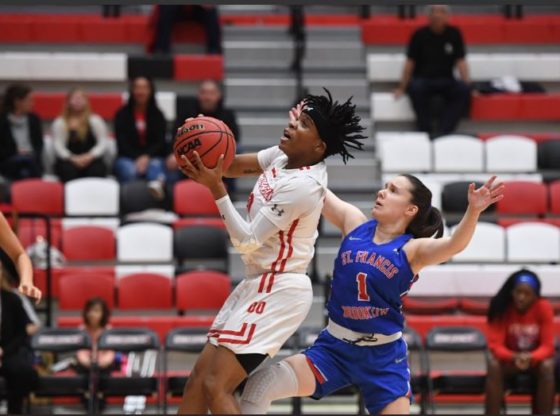 The contest started with the Terriers and Red Flash head to head however with a good three-pointer from freshman guard Nevena Dimitrijevic and a good layup from junior forward Ally Lassen, the Terriers took a five-point lead, 9-4. Continuing with the same momentum, they went on to take the first quarter 20-15.

In the second quarter, the Terriers extended their lead to double digits in the fifth minute of play, 34-23. On a 3-0 run, the Red Flash cut the lead to seven to go into half time.36-29.

Senior guard Jade Johnson finished with 20 points in 39 minutes of play. She also finished with one rebound, two steals, and landed nine of 10 free-throw shots.

The Terriers heads to Pittsburgh, PA as they will take on the Robert Morris Colonials at the UPMC Events Center on Monday, January 13, at 4 p.m.

Men’s Volleyball Defeated in First Match in Program History: 0-3
Men on a Mission Edged in the Last Second of Play Against SFU ﻿