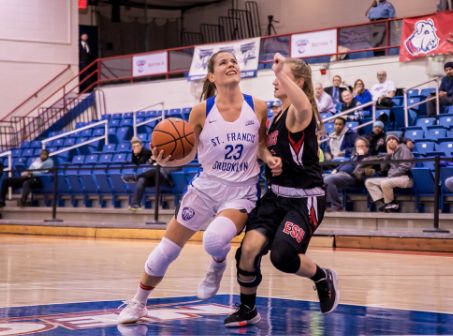 Earlier this evening, the St. Francis Brooklyn Terriers hosted the East Stroudsburg Warriors at the Pope Education Center, Brooklyn Heights, NY. The Terriers defeated the Warriors 84-62 to recorded their third win of the season.

The Terriers led the way in all four quarters but early in the first, the Warriors were up 5-14. This was their largest and only lead of the contest as the Terriers, with three minutes and 12 seconds left on the clock went on a 13-0 run to end the first quarter 18-14.

The Terriers continued through the second and third quarters increasing their lead margin. In the fourth quarter, with two minutes and 59 seconds remaining on the clock, they recorded their highest lead of the contest, 80-56.

Freshman guard, Nevena Dimitrijevic led the Terriers with 23 points (season-high for her) in 36 minutes and recorded seven rebounds, eight assists, and two steals. She landed five of seven shots at the free-throw line and scored four of her five attempted three-point shots.

Freshman forward Jenna Jordan recorded a team-high for the contest with eight rebounds. She also scored 12 points and landed a perfect four shots at the free-throw line within 23 minutes.

For the Warriors, senior guard, Tiffany Lapotsky recorded a team-high of 16 points and seven rebounds in 25 minutes. she also assisted in three baskets.

The Terriers will be back on the court at the SEFCU Arena in Albany, NY, on Saturday, December 14, as they take on the Albany Great Danes at 2 p.m.