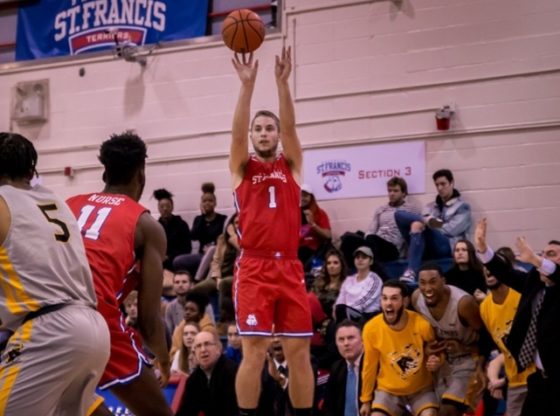 The St. Francis College Men’s Basketball Team recorded their second win of the season earlier this evening at the Pope Physical Education Center Brooklyn, NY, when they defeated the Medgar Evers Cougars 122-58.

The Terriers immediately took control of the game as they started with a 24-9 run and then went on 27-9 run to end the first half, 58-33. Close to the 11th minute of the first half, both sides were raining threes as both the Terriers and the Cougars threw up four back to back three-point shots.

In the second half, the Terriers continued what they started in the first as they stormed through the second limiting the Cougars to only 25 points. They went on to finish with a 64-point lead.

Berrios played 21 minutes leading his team with a high of 13 points. Gravey-Mwazi played 27 minutes in which he tallied 11 points.

Quartlebaum top scored with 20 points. He played 19 minutes in which he recorded two steals and assisted in four baskets.

Evans recorded his first double-double for the season with 17 points and 13 rebounds. He played 20 minutes. He also landed five of six shots at the free-throw line. Hawkins played 18 minutes in which he tallied 17 points. He also grabbed two rebounds and assisted in three baskets.

The Terriers will be back in action on Tuesday, November 26 at Little Rock, AR, where they will take on the Little Rock Trojans of the Sun Belt Conference. The game starts at 6:30 (CT)/7:30 (ET).