﻿Terriers trump LIU in the Battle of Brooklyn

Home /News, Sports/﻿Terriers trump LIU in the Battle of Brooklyn 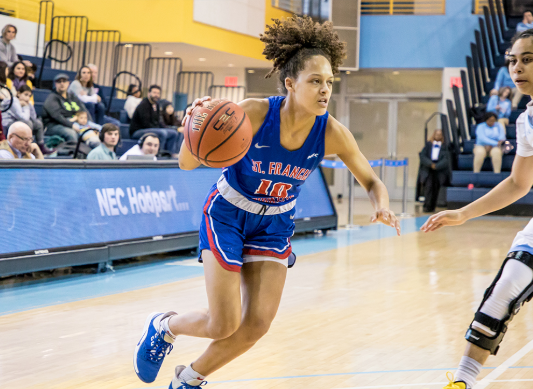 Saturday afternoon inside the Steinberg Wellness Center, the St. Francis Brooklyn Women’s Basketball Team (7-17, 3-10) defeated the LIU Sharks (5-18, 4-8) by a score of 71-54. This was the second meeting of the two teams this season in which the Terriers won both contests.

Holding 10th place in the NEC, the Terriers must better their standing within their remaining five games as only the top eight teams will move on to the NEC Tournament playoffs.

Ryan Weise kick-started the contest with a jumper recording the Sharks’ first basket. Seconds later, Ally Lassen off the assist of Nevena Dimitrijevic would record the Terriers first two points tying the contest at 2-2. They would then go on a 17-10 run to end the quarter 19-12.

In the second quarter, the Sharks would go on an early 5-0 cutting the lead to 19-17. However, the Terriers would extend their lead on an 11-2 run taking their lead into double-digits, 30-19, as Abby Anderson scored a good layup at 2:34. Continuing on 8-4 run, the Terriers would head to the locker room with a 38-23-point lead.

Freshman guard Alyssa Fisher finished with 14 points in 31 minutes. She grabbed a career-high of six rebounds, assisted in two baskets, recorded a career-high of four steals, scored one of three attempted three-pointers, and landed five of eight shots at the free-throw line.

Junior forward Abby Anderson finished with her season double-double of the season in 31 minutes. She recorded 13 points, a career-high of 13 rebounds, assisted in one basket, scored one of two attempted three-pointers and landed two of three shots at the free-throw line.

Recording her first point of the season was Danae Barkley. In the third quarter with 0:24 on the clock, Barkley was sent to the line to shoot two. She recorded her first point, scoring one of two shots at the free-throw line.

The Terriers will be back in action on Friday, February 21, as they host the Bryant Bulldogs at the Physical Education Center, Brooklyn Heights, New York. Game tips off at 5 p.m.