﻿SFC Men on a Mission Defeats the Hornets (6-6)

Home /News, Sports/﻿SFC Men on a Mission Defeats the Hornets (6-6) 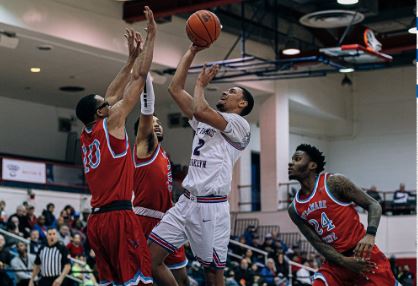 At the start of the contest, the Terriers took an immediate four-point lead. However, the Hornets on an impressive 21-5 took the lead away from the Terriers bringing the score to 9-21. They would take control of the first half 32-36. In the second half at 10:50, the Terriers equalized 50-50. Thereafter, they went on a 6-0 run and then a 21-2 run to take win.

For the Terriers, senior forward Deniz Celen recorded a double-double in 28 minutes. He finished with a high of 27 points and 11 rebounds. He also landed a perfect four shots at the free-throw line.

The Terriers will be back in action in the New Year. On Thursday, January 02, the Terriers will host Fairleigh Dickinson at the Pope Physical Education Center, Brooklyn Heights, NY. Game tips off at 7:30 p.m.