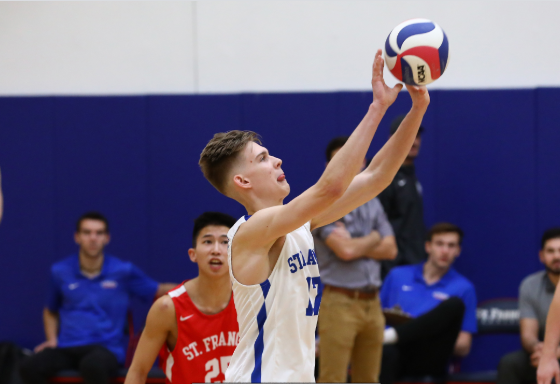 In the first set, the Gothic Knights outscored the Terriers 25-16. They took the set on a 15-7 run. In the second set, Terriers co-captain Michael Basile (outside hitter) was forced to leave the game due to an injury. However, the Terriers came out victorious with a 25-15 win. They continued as they took the third set 25-10 and later took the fourth set 25-22.

Junior outside hitter Jonathan Andrews led his team with 14 points. He also recorded 13 kills, one assist, one ace, and 14 digs.

Sophomore outside hitter/setter Leo Ferrari finished with 1.5 points, one kill, 26 assists, one block, and eight digs.

Freshman libero Dominick Pikura led with a career-high of 18 points, 16 kills, three assists, one ace, and two blocks. He also finished with 13 digs.

The Terriers will be back in action on Thursday, February 27, as they take on Barton College in Wilson, North Carolina. Game starts at 7 p.m.