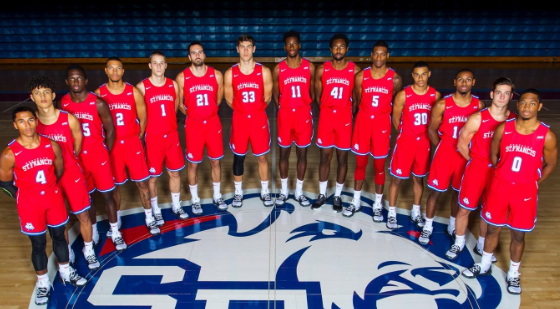 St. Francis College Men’s Basketball Team is getting ready for the upcoming season which starts on Tuesday, November 5.

The Terriers finished fifth last season with a record of 17-16, and head coach Glenn Braica and his team are confident they can mount a challenge for the Northeast Conference crown this time around.

Looking forward, Coach Braica said: “The Northeast Conference continues to be an extremely competitive league, and we look forward to another exciting season. Every NEC game is a battle, and we have to be on top of our game in order to be successful.”

For the 2019-2020 season, the Terriers will not have the privilege of having Glenn Sanabria as their leader.

He has graduated and moved on to his next success. Last season, Sanabria was in the starting lineup for all 33 games. He also played for a total of 1016 minutes and finished off the season with a high of 405 points, 103 rebounds, and 12 blocks.

So, the question to be asked is: “Who is the new leader of the Terriers?” When the question was raised, Coach Braica said that the position is still vacant. He also said that this is something to be earned and he has no doubt that over time his guys will earn it.

Chauncey Hawkins was given an opportunity by Coach Braica as he was chosen to represent the Terriers at the NEC Hoops Social Media Day. “Chauncey is a pretty good and experienced player,” Coach Braica commented. This season, Chauncey will be back on the court with his fellow Terriers.

They are joined by three newcomers: Freshman Rob Higgins, Freshman Trey Quartlebaum and Graduate Student Unique McLean. These three players will serve as guards and they will surely add to the performance of the Terriers.

Coming from Middletown, NJ, Freshman Rob Higgins weighs 175 pounds and is 6’1” tall. He attended Middletown North Highschool where he played varsity basketball for four years. There, he was positioned as a guard. He also played AAU ball for New Heights NYC. He finished his career in the Shore Conference with 2,279 points, the third-most-all-time in the history of the league. In his senior year, he averaged 28.2 points per game and was named B North Player of the year.

Unique McLean, a Graduate Student, is a native of Brooklyn, NY. He is no stranger to Division 1 Basketball. McLean also weighs 175 pounds and is 6’2” tall. He attended the MacDuffie School and then went on to the University of Massachusetts where he spent his undergraduate career. At the University of Massachusetts, he played 56 games and made 28 starts. He recorded 4.5 points, 4.3 rebounds, and 1.6 in 22.5 minutes. This was done in two seasons. In the 2018-2019 season, McLean played in 23 games, starting 8 games and averaged 3.0 points, 3.3 rebounds, and 1.3 assists per game.

Non-Conference games begins on November 5. The Terriers will have five home games and seven away games.

The Terriers are set to play an unbalanced 18-game conference schedule with nine home and nine away games.

The 2020 NEC Men’s Basketball Championship takes place on March 4, 7 & 10 at campus sites. For the 16th straight year, the NEC Men’s Basketball Tournament will consist of an eight-team playoff format with all games played at the home of the higher seed. After the quarterfinals, the teams will be reseeded, so the highest remaining seed plays the lowest remaining seed in the semifinals.